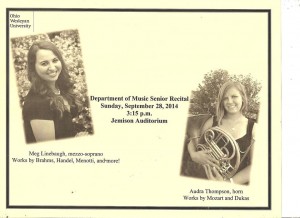 Thompson was the first to perform, and she played three pieces by Dukas, Gliere, and Mozart, respectively.

“The first movement (of the Mozart piece) was my audition piece for Ohio Wesleyan,” Thompson said. “The second movement was my very first solo ever. In 7th grade I went to solo and ensemble with it.”

Thompson has been playing the french horn for ten years. She started when she needed to choose an instrument for band class, and her family owned a 100-year old horn made in Germany that they kept in their basement.

“I was always told ‘Don’t touch that horn. Don’t mess with it,’ so whenever I thought my mom was gone I’d go mess with it.”

To prepare for her senior recital, Thompson rehearsed with the accompanist and took lessons with Kim McCann. Thompson said they guided her and taught her to not just play the notes on the paper, but to learn what the notes were intended for.

Thompson said she liked that the french horn is a less common instrument.

“It’s also an instrument that can be not only represented as the hero but also the villain in music, because of its majestic and human voice-like quality.

Freshman Nicole Rozsa attended the recital for a music appreciation class and said it was “really nice listening to a solo piece.”

Linebaugh, a mezzo-soprano, performed nine songs after the intermission. The first two were in German, followed by two in French, two in Italian and three in English.

Linebaugh said the music was chosen because it was technically challenging and she practiced by studying the translations of her music and “just getting comfortable with the performance aspect of it.”

“I liked the way she showed emotion when she sang and just everything in general,” said sophomore attendee Spencer Harris.

Linebaugh began singing in the second grade. She said she grew up singing show tunes around the house with her mom and watching musicals.

“I always loved when we sang in music class in grade school, then in second grade I sang at a school Christmas party. After that they were like ‘Wow you can sing,’ and it just went from there.”

Linebaugh said she loved to sing because she can take on another character and express herself.

“Music has this special ability to capture emotions and to really touch people in a unique way,” she said.

A Q&A with Brianna LaCroix