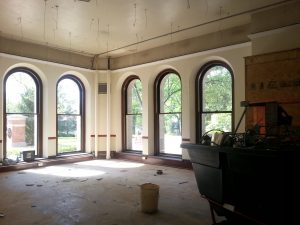 When students return to campus in fall, they have much to look forward to. A new welcome center for the Admissions Office in Slocum Hall is one of them.

As alumni week came to a close earlier this month, Slocum was closed for remodeling. The lobby on the ground floor of Slocum is being remodeled and the inside wall is being replaced by glass panels, while no changes are being made to the other floors.

The total budget for the project is $300,000. This funding, according to President Rock Jones, comes from proceeds from an endowment that can be used at the president’s discretion for projects on campus.

Jones said, “While many campuses of our sort now are spending millions of dollars on new welcome centers, this modest investment allows us to showcase a historic building with a setting that welcomes students and creates a fabulous first impression of OWU.”

The project, scheduled to be completed by the first week of August is being done by Thomas and Marker Construction company based in Columbus, Ohio.

Sarah Burns, assistant director of Admissions said, “We’re getting a new welcome center in Slocum … It’s not going to be as modern as Merrick though.”

The Admissions office is temporarily located in Merrick Hall for the summer. 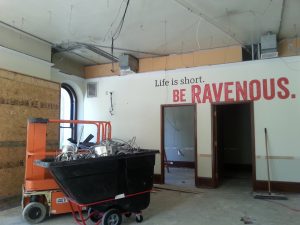 Burns said, “A new coffee bar and some new furniture is being added to make it (the lobby) more inviting.”

Susan Dileno, vice president for enrolment management said, “The building wasn’t making a very good first impression … We had issues with the lobby given that it’s very small.”

The biggest change, according to Dileno, is addition of more seating capacity to the admissions lobby and replacement of an inside wall with glass.

“We had a secret architect that came in and toured the campus, and he graded us a D in terms of Admissions space,” said Dileno. “A lot of colleges are putting up a welcome center. This is comparatively modest … and a lot of it is cosmetic.”

Along with remodeling, asbestos removal also is being done.

Peter Schantz, Director of Physical Plant Planning and Operations said, “There is asbestos that needed to be remediated in the building, but it is not the cause of the renovation … The asbestos containing material was encapsulated and does not need to be removed until such a renovation occurs.”

Burns said, “The asbestos in Slocum was underneath concrete … no one was ever in any danger from it and now it’s all gone.”

Among other changes, a mini kitchenette will be added to the lobby as well and the carpeting will be replaced by tiles.