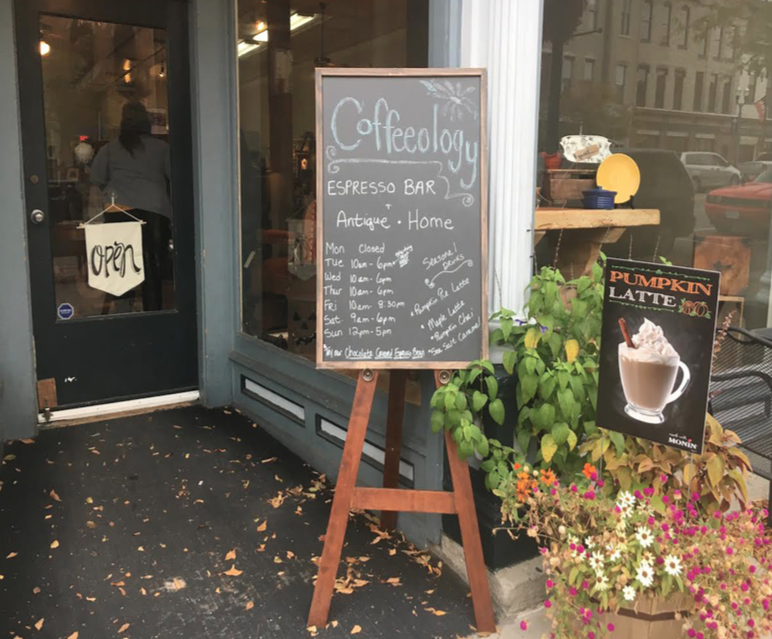 There is a new destination in town for coffee and antiques.

The new store, the first of its kind is co-owned by Delaware resident Melissa Dixon and her mother.

“It’s something we’ve talked about for the past 8 years. [My mother has] been in the antique business for the past 20 years … and I geek out about coffee,” Dixon said.

She said she is very passionate about coffee. “I went to a barista school … and learned the science behind making coffee … how the beans are roasted, and how you can taste the different regions just like wine tasting … I learned the chemistry behind it.”

She added, “We wanted to have a place where people can come in and have coffee, chat and shop.”

Dixon, originally from Long Beach, California said she liked Delaware’s small town community and her husband who is from Ohio wanted to retire and settle here.

“Until you get away from it [California], you don’t realize how social status driven it is and how needed it is to be in a small town that’s community-oriented,” she said.

Although there are three other antique stores downtown, Dixon said she is not afraid of competition.

In the antique world, she said, it is good to open up in an area where there are other antique stores. “People want to come here and it becomes a destination … As for coffee shops, everyone does things differently. The atmosphere and ingredients everywhere are different,” Dixon said.

The store is currently run by a team of six employees, including two college students and stay-at-home mothers.

The response, Dixon said, has been positive. “People like what we have to offer and they like the quality of what we have.”

The espresso bar also features baked goods which Dixon said she buys from a baker in Powell. The coffee, she said, comes from a roaster called One Line. “They have an expresso bar down in Short North [Columbus], so that’s where I get my coffee from.”

From the frozen lattes to dark choco- late mochas, many of their drinks have been very popular.

Dixon said, “We have some fresh fruit frozen smoothies, which have no sugar in them … I try to get a little bit of every- thing, so that way we hit all the different taste palates and flavors.”

While the store is just over a month old, Dixon already has plans for the store’s expansions. The basement, she said, will soon be called a “Man-Cave.” “We are going to put some of our col- lectibles down there that guys tend to like and we’re going to put a TV there and have ESPN on,” she said. “We have furniture down there currently, and some newer retail up here.”

The unique name was Dixon’s idea. She said she came up with the name six years ago and the inspiration is her approach to studying the science of coffee making.