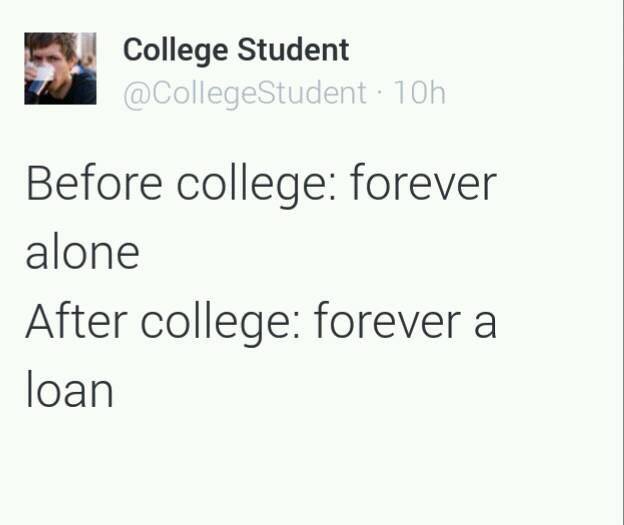 Congratulations! You just graduated with an average student debt more than it has ever been in the history of college education, even when adjusted for inflation.

The debate is not new. For more than two decades now, students and scholars have wondered if a college degree really is worth it. College debt is not just a burden to the student, but is essentially family debt and one that makes you question your choices every day, every minute.

In my case, as an international student, I am paying a higher amount than my American classmates (and under- standably so). On top of that, the exchange rate makes the cost nearly 65 times more, and with an interest rate of 14 percent, I will graduate college with double majors in economics and journalism and a debt of $126,748 – sounds exciting, I know.

There’s another catch here. While some majors are more promising from a career stance, some are not as lucrative. The disparity is such that a petroleum engineering major is likely to earn a median wage of $93,000 more than that of an elementary school teacher.

As much as we hate to admit it, there really isn’t enough money in some of our favourite creative elds.

As a journalism major with a bachelor’s degree, the median annual salary I am destined to is $56,000, which does sound reasonably sustainable enough. But if it were not for my scholarship and aid, this is also exactly the amount I would have been paying annually to get my degree.

Student debt has forced many of my friends to drop out or transfer to a community college. It requires emotional and nancial strength to survive in this crippling time, where available jobs on campus offer only minimum wage and even the future average prospective earnings are statistically not high numbers.

Solutions are simple, but socialist; perhaps not the most desirable term for this country. However, like Brazil and Germany, in the ideal world, all countries should have free higher education, at least in public universities. Granted, the amount of taxes we pay, this could be one use of our tax money every citizen would actually be appreciative of.

If not anything else, this will prevent unexpected (but really, expected) frustrations and sessions of serious reconsideration of your very decision to get educated.

All of us begin college with goals of traveling the world, or buying that expensive car or just saving up to retire early, but most of us end up paying our college debt for much of our career.

So saddening the condition is that USA Today called student debt America’s next big crisis.

Ideally, education is so noble a goal we should not be measuring it against material/evil money.