When you take your seat at a Babbling Bishops show, the lights are down and the curtains drawn but the crowd is already laughing.

“They’re really funny,” sophomore Jack Bouman said. Before the Babblers cracks a joke, the audience is already giggling from memories of past performances and the anticipation of the gags to come, according to Bouman.

The Babblers are nearing the end of their performance season as the semester draws to a close. They have a practice every week and shows throughout the semester. They are currently approaching their nal performance of the academic year, and for multiple senior Babblers, their last performance at Ohio Wesleyan.

“[Improv is] an unscripted play . . . you have to put yourself in a situation without any prompting. The best way to describe it is adult make believe,” senior Babbling Bishop Hayden Knisley said.

The Babblers agree that everyone does improv for different reasons. Dane Poppe, another senior member of the troupe, finds improv to be a valuable tool for emotional release. “You . . . bring everything in with you. What you’re going through becomes part of your improv,” Poppe said. “It’s good for my mental health.”

Knisley agrees. “I put a lot of myself into what I do. [Improv] lets you exaggerate and personify your emotions,” Knisley said. For him, fully embracing one aspect or emotion can help to understand what it means and how to deal with it.

Personal therapy isn’t the only reason to do improv comedy, however. “I just want to make people laugh,” Knisely said.

But what is improv really, besides adult make-believe? “In improv, the art comes from the conglomeration of your ideas and everyone else’s, in a big mess,” Poppe said. “I enjoy the chance to make art on the spot and . . . make new things with other performers.” In other words, the opportunity for collaboration in performance is what sets improv apart.

Every Babbler has their own favorite memory of a performance – a sketch they pulled off that rises above the rank and file for them. Poppe recalled a scene-within-a-scene, described by Knisely as “very inventive,” in which they played merchants in a mall peddling ant farms.

“All of the other scenes took place in the ant farms. Whenever we thought there might be a lull in the scene, we would just shake the ant farms and they would have an earthquake.”

The Babblers hope to shake things up at their nal per- formance of the semester on Thursday, April 20 at 9:15 p.m. in Milligan Hub There will also be food trucks and a magician in the Stuy pa.rking lot from 7:30-9:00 p.m. 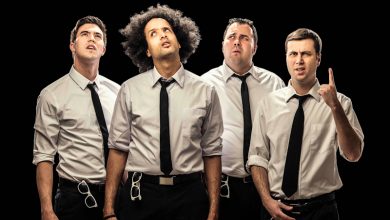 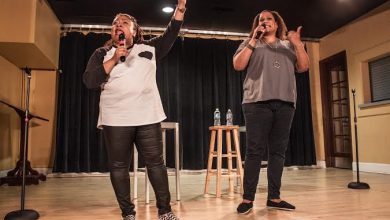