Much is being made of the fifth assessment report that has come from the Intergovernmental Panel on Climate Change (IPCC) regarding an urgency to limit our planet’s increasing global warming, professors at OWU have been studying the effects of an increasingly warming climate.

This report is drawing more attention than previous ones coming from the IPCC because it puts a date of 2030 to 2040 on costly changes to our way of living and focuses on what it means to have an overall 1.5 degrees Celsius warming of our planet.

As of now, our planet is at 1 degree Celsius over pre-industrial levels. The report says there is almost no way of avoiding 1.5 degrees at this time, and to keep it to that requires major efforts politically, economically and socially.

Professor of mathematics, Craig Jackson, is not confident that our planet will limit its increasing global warming to 1.5 degrees.

“I’m not optimistic and the reason why is because this is a really, really hard problem. It’s not the problem that can be solved by one or two or three powerful nations. Every nation has to be involved in this,” Jackson said.

Professor of botany and microbiology, Laurel Anderson, teaches courses that all deal with climate change in one way or another. She too is not optimistic of a limit of a 1.5 degree increase in temperature.

“We have the technology to make this change, but we lack the political will. I don’t think it is impossible, but we need to take a radically different approach to generating and using energy than we do right now,” Anderson said

Large issue may arise from a global warming of 1.5 degrees: food security, drought and floods, poverty and coral ecosystems. These problems can be even more devastating at an overall warming of 2 degrees Celsius.

Coral loss is a big issue currently because they are being threatened right now due to ocean acidification. With a global average of 1.5 degrees increase, the IPCC is expecting a 70 to 80 percent decline in corals worldwide. And if the planet gets to 2 degrees warmer, it could be up to a 99 percent decrease of coral ecosystems, which could cause mass extinction events.

“Corals are a huge part of certain ecosystems, they are the reef builders. These corals build the habitats for many other fish and drive huge tourism to places like Australia and various islands in the Pacific as well as fishing in many places,” Jackson said. “There’s kind of a domino effect on losing these corals.”

“When we’re talking about climate change, one thing to keep in mind is that it’s not a specific event, it’s not a hurricane, it’s not landslides. This is a 30 year average,” Amador Rowley said.

Ohio and the midwestern states invest heavily in agriculture and in the short term are benefitting from this because farmers now can start growing crops earlier and harvest longer. Parts of midwest have 2 growing seasons which means more food, but this is only seen as a short term benefit. Over long term, growing season will grow northward. By 2100 this will not be the case anymore.

What may be confusing is that the increase of 1.5 degrees is not uniform, that number represents an average increase in warmth across the globe. Amador Rowley puts this in an example students may be more familiar with: OWU average GPA’s go from 3.4 to 3.5 but there can be more students with 1.0 GPA’s but are offset by the increase in people that have 4.0’s. The same thing is happening with our planet’s climate. So 1.5 is very global. The tropics are already hot so it won’t get much hotter, but the arctic is very cold so it’s easier to transfer energy outward.

“The magic number when it comes to arctic climate is zero degrees. Anything below zero degrees Celsius, you have ice. Once you’re above zero degrees, you start melting.” Amador Rowley said.

Amador Rowley also cautions people on the alarmism that comes with a rise in sea level Water expands when warmer. Coastal locations in the United States such as Florida are not close to Greenland but melted ice will increase water levels in between the two regions. However, it would take over 500 years for Greenland to melt and for Florida to be completely flooded. 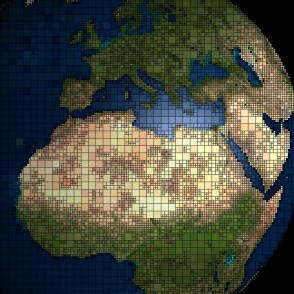