Photo by Carl DeScott: Annika Carroll sat at the entrance of University Hall with other OWU students protesting against the administrations lack of action for equity and justice for students. 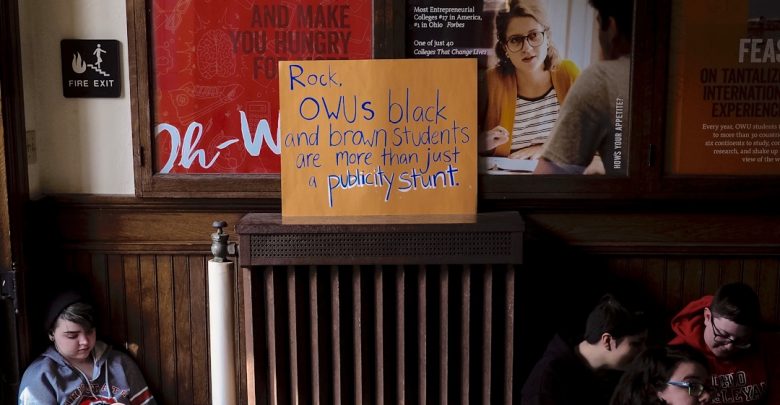 Sophomore Shay Manuela talking to professor Biser during the sit-in. 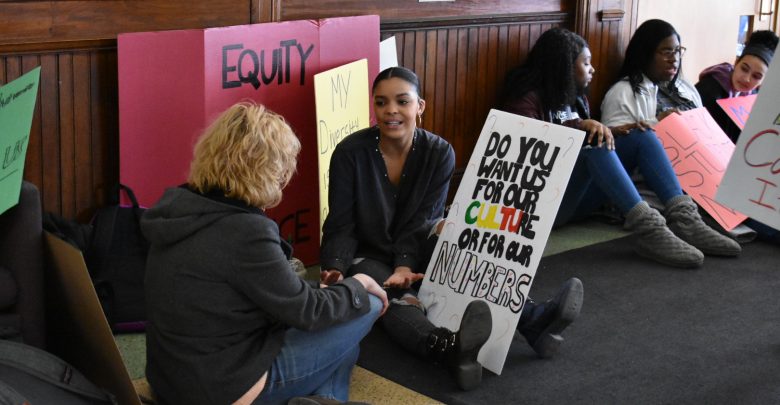 Ohio Wesleyan University (OWU) students held a sit-in March 1 at University Hall to protest against the treatment of minority groups on campus.

The sit-in predominantly occupied the main hall of the ground floor of University Hall, as well as Slocum Hall for a brief period. Organized by senior Daniella Black, the event was held to not only raise awareness for unheard voices, but to also start a conversation about the University’s treatment of its minority students.

The morning of the protest, the student organizers sent out a letter to the campus. In the letter, students listed their complaints and solutions to campus-wide issues regarding race.  A survey was also attached, allowing others to say what they identify as an issue on campus.

“I hope that this protest starts conversations about diversity, inclusion and justice on campus and that they continue as the years go on,” senior Sarah Mattick said. “And result in changes for the better.”

Mattick said multiple recent incidents as causing the protest, including the vandalism of a diversity bulletin board in Hayes Hall and OWU Public Safety shutting down a House of Black Culture party an hour before it was registered to end.

“[Admission] tours were told to avoid entering University Hall, as some visitors might get the wrong idea involving the intentions of the protest,” said freshman Micaela Kreutzer, an admissions worker.

Senior Cindy Huynh said she loved that students and faculty passing through took the protest in stride and were open to having conversations with protestors about their perspectives.

“I think it’s important to be here to show that we see them … there are people who want to make things better,” associate politics and government professor Ashley Biser said. Biser attended the protest because she considered it an opportunity to learn and listen to students who do not feel that their voices are being heard.

Benji Acuna, a sophomore and protestor, said all of the aforementioned events for the protest, as well as a speak out by the OWU Student Inclusion and Advocacy Committee involving unreported incidents against minority groups.
“The issues the students are bringing up are important and urgent and I think my office, because we primarily serve people of color, in particular, is a major stakeholder in supporting movements like this and trying to ensure that action happens as a result,” Charles Kellom, assistant dean of office of multicultural student affairs, said.

“I am grateful for the students’ work and for their desire to collaborate with me, the officers, their fellow students and the faculty and staff to explore where we are now, where we want to be, and how we get there together,” President Rock Jones said during the protest and a campus-wide email. “I am grateful to the members of the faculty and staff who stopped by to visit with the students today, listening to them as they shared their concerns and their suggestions.”

On March 7, Jones emailed the campus community, saying that he will meet with students again to discuss the issues raised at the sit-in. Jones also linked to a webpage for student recommendations on the school website.

Did the groundhog predict wrong?