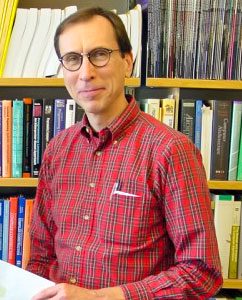 When Alan was hired as an Assistant Professor at Ohio Wesleyan in 1990, he became the first professionally trained computer scientist to teach at OWU. During his 29 years with the University, Alan played a central role in shaping our Computer Science program into one that has a distinctive combination of both theoretical and applied elements and that provides excellent preparation for both graduate school and employment in the computer industry. During his tenure, Alan advised all of our departmental honors projects in computer science. He maintained high standards and provided support for student effort and creativity.

Alan’s particular areas of expertise are in programming languages and compiler design. He taught courses across the range of our computer science curriculum, including courses on computer organization, paradigms of computation, database systems, computer systems and architecture, artificial intelligence, programming languages, and computer theory and design.

The OWU Computer Science program that he spearheaded has produced numerous students who have had outstanding success in academia, in research, and in industry. In recognition of his outstanding teaching, Alan won the Sherwood Dodge Shankland Teaching Award in 2001. He was, and remains, a valued colleague, always willing to provide advice about how best to approach a problem or a delicate issue.

Alan has serious interests in music, and he developed and twice offered a team-taught course on computer music with a colleague the Music Department. In recent years, Alan played flute in the OWU wind ensemble.

Alan has many interests and possesses encyclopedic knowledge in a variety of diverse fields. He has commanded great respect from his colleagues and his students and has been a valued member of our department and the OWU community.