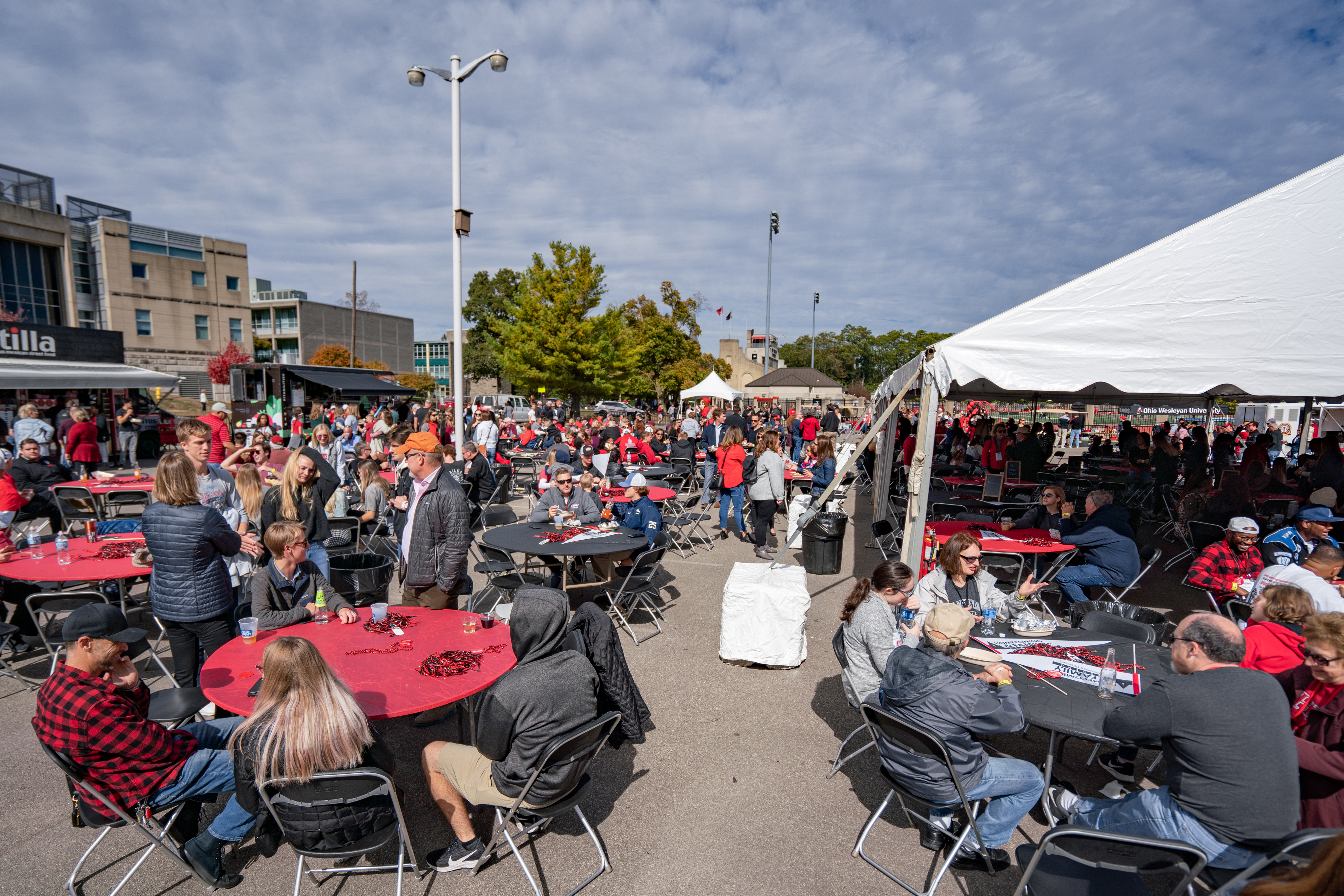 OWU alumni who have contributed nearly $200 million to the school were recognized during Homecoming last week.

To kick start Homecoming weekend, the Senior Class Council (SCC) and Ohio Wesleyan University Student Alumni Association (OWUSAA) held an event on the JAYwalk during the lunch hour on Oct. 17. The event celebrated OWU being close to reaching its goal of raising $200 million in donations. Students painted a rock that was then hidden on campus for the alumni donors to find over the weekend. Lawn games were set up and rock-themed music was played. Students got photos with the Bishop mascot. SCC members passed out annual homecoming shirts.

On the night of Oct, 18, students and alumni gathered at The Hill for the annual Homecoming bonfire. They ate pizza, caramel apple, s’mores and cider. There was also a beer garden, music, multiple campfires, lawn games and glow in the dark miniature golf. The event was sponsored by the Student Involvement Office (SIO) and the Interfraternity Council.

“This is always one of my favorite events to help plan,” said Ali Mayer, coordinator of student involvement and first-years programs. “I love an event that connects the current students and alumni. OWU has such a great support system from the alumni.”

In celebration for the football game on Saturday, students and alumni attended the tailgate in Selby Stadium parking lot preceding the game. There were food trucks and the Marching Bishops played.

“We tried something new this year,” Mayer said, “by the SIO sponsoring 100 meals at the tailgate. Students were able to pick up a free voucher during the week to redeem at a food truck. We wanted to alleviate the cost and encourage student attendance.”

Many OWU sporting events took place over homecoming weekend. The football team beat DePauw 28-13 which put them at a 5-1 record. The stands were filled with students, faculty, alumni and families.

“The stands were packed,” said senior Ryan Rubel, a strong safety on the football team. “I loved playing with the alumni supporting us. It felt great to celebrate homecoming with a win.”

Men’s soccer, volleyball and field hockey were also victorious over the weekend. The men’s soccer win earned the team a spot in the top 20 ranked nationally for Division III, according to the OWU athletics website.

On Oct. 20, all of the fraternities opened their houses to students and alumni. Fraternity members took them on tours.