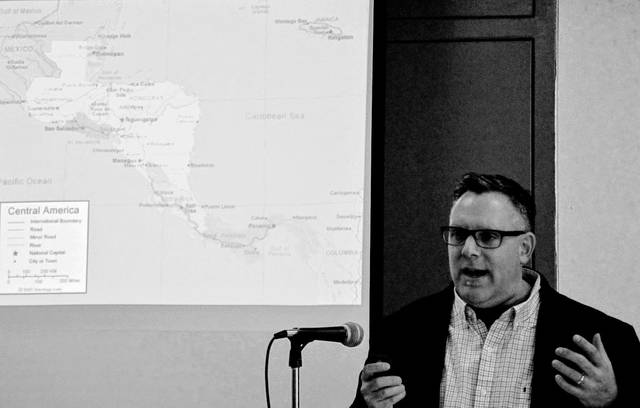 One of President Donald Trump’s major campaign promises turned into policy has been to limit undocumented immigrants from coming into the U.S. from Mexico and Central America.

And while the number of Mexican immigrants has slowed, since 2013 the number of people coming from the Northern Triangle of Central America – El Salvador, Guatemala, and Honduras – has increased dramatically.

Erinn Nicley, a political science professor at Western Governors University, who has studied in the Northern Triangle, kicked off the Great Decisions 2020 weekly lecture series Friday at the William Street United Methodist Church.  He focused on the history of U.S. intervention in these countries, along with major challenges for our foreignrelations and the current migration situation.

Nicley started with a question to the audience: “Who do we want to be as people in our relationship with our central American neighbors? Do we address this in Central America, here at home, or do we simply look the other way?”

Nicley said Trump revoked President Obama’s immigration policy, moving from an open hand to a closed fist. But U.S. relations must find the balance between development, immigration and security programs for change to occur, he said.

Since the Monroe Doctrine in 1823 laid the groundwork for expansion, the U.S. has intervened in Central American by actively helping overthrow governments, defending authoritarian rulers and abusive military operations, funding right-wing paramilitary groups and turning a blind eye to the commission of human-rights atrocities, Nicley explained.

The modern-day experience of the Northern Triangle relies on three conditions: political, economic and social life. Often these countries are enveloped in weak political institutions and driven by corrupt political leaders.  Furthermore, the countries gross domestic product rates are the lowest in the Western Hemisphere and they lack a middle class, he said.

Due to these factors, the countries “become a breeding ground for crime,” Nicely said. He also suggested “we take partnership to improve the quality of life for the Northern Triangle countries.”

During Obama’s administration, the U.S. allowed immigrants into America who came from broken homes or who sought escape in the wake of natural disasters. Ever since the Great Recession in 2008, the number of Mexican immigrants has decreased, but there has been a drastic increase in Northern Triangle immigration. However, Trump instituted a zero tolerance policy, which has changed the immigration flow.

In the past, immigration from the Northern Triangle was made up of single males emigrating for better opportunities. Presently, entire families and unaccompanied minors search for a better life in the U.S. due to the global belief in the “American Dream,” but many are stopped at the border, Nicley said.

The topic for the Friday, Feb. 21, discussion is “Artificial Intelligence and Data” featuring David Staley, associate history professor and director of The Humanities Institute, The Ohio State University.