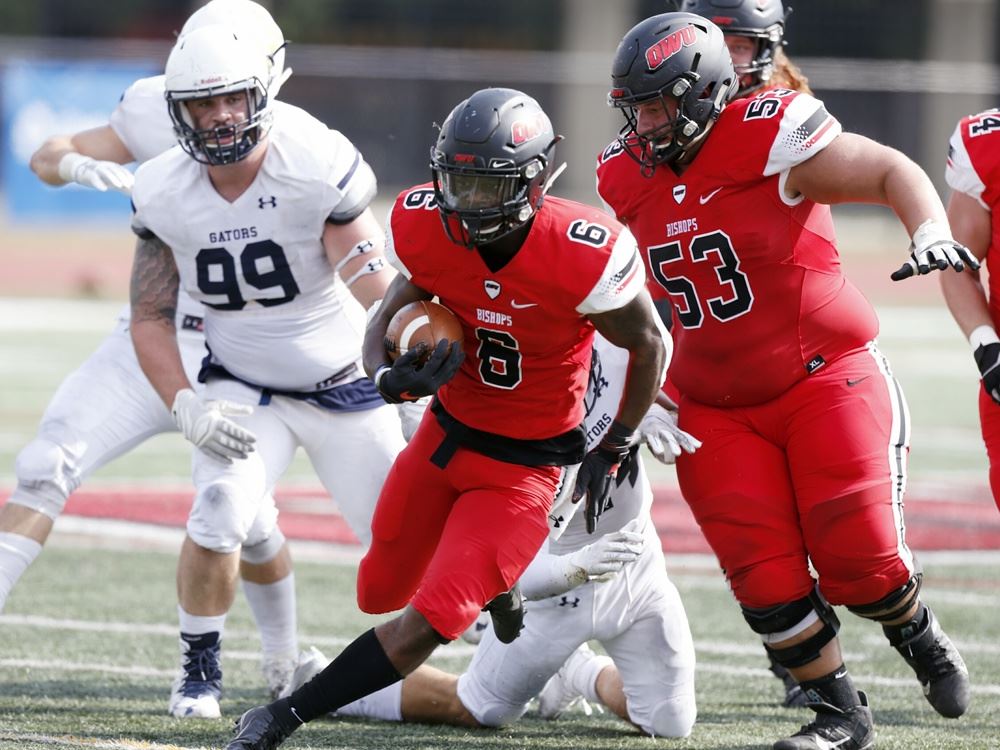 The Battling Bishops’ football team has started the season rather well. It is 4-0 so far this year, defeating Otterbein University 22-10, Kenyon College 42-0,, Oberlin College 55-3, and most recently, Allegheny College, 28-10, on Saturday afternoon. The wins give the Bishops an average margin of victory of 31 points.

The Gators of Allegheny went into the matchup with a record of 1-2. In contrast to the Bishops red hot start to the season. A year ago in 2018, the Bishops went 4-6 overall and tied for fifth place in the NCAC (North Coast Athletic Conference.) This year however, they have 38 incoming freshmen, 23 seniors, and 29 other’s racing toward the goal of NCAC champions.

Head Coach Tom Watts observed that last season they were, “always able to play well and pick it up toward the end of the season but were never really able to start the season on the right foot.” However, this season has been the opposite, as their 4-0 record suggests.

Senior wide receiver and captain, Mher Tcholakian said earlier this season that a big motto and slogan for this year’s team is “going 1-0.” The football team uses this slogan for everything they do. Whether it’s in the weight room, at practice, or whatever the case may be, they want to, “go 1-0.”

“This ‘1-0 slogan’ is our main focus as a team, [Going 1-0] means giving your all every single rep and every single play.” Tcholakian explained.

Tcholakian, on this football team for three years, starter for two, he is witness to the Bishops declining record over the last few seasons. “We’ve always known we’ve had talent on both sides of the ball. There was just something missing, our execution. We just could not finish that last little step.”

Aside from his verbal leadership, Tcholakian also has been leading by example through his play on the field. He has 145 receiving yards this season, 61 on Saturday alone, which marked a new season high for him, along with his first receiving touchdown of the season.

The Bishops look to continue their win streak when they face Wabash College this Saturday in Crawfordsville, Ind.