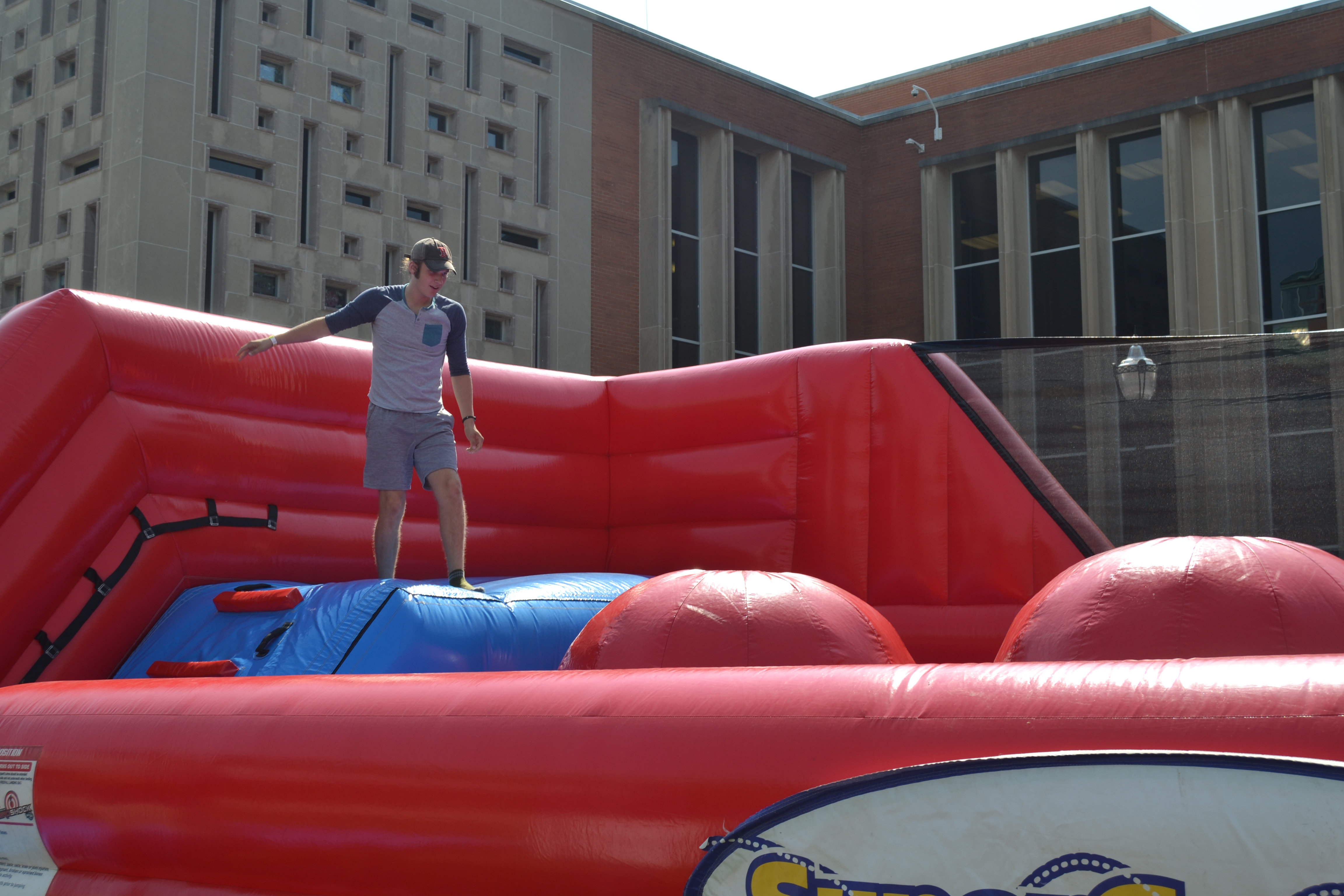 Ohio Wesleyan Wipeout was…well, a Wipeout. Though attendance was low Friday students enjoyed competing on a couple inflatable challenges on the JayWalk.

The Campus Programming Board had Wesleyan Wipeout running from 11 a.m. until 1 p.m. It had a particular reason for choosing this time frame according to club member Catie A. Hyatt.

“This is the time that people have to spend to like eat lunch and then have like a few minutes before class. So it’s kind of a fun little thing they can do,” she said.

The board rented two inflatables from one of the SuperGames warehouses located in Columbus. The inflatables at the Wesleyan Wipeout were the Leaps and Bounds- Big Red Balls and the Kapow obstacle course, both a part of SuperGames’ interactive play attractions. To comply with SuperGames protocols, students had to fill out a waiver before they could participate in the activities.

Two of the students who participated in Wesleyan Wipeout said they preferred the Kapow obstacle course. According to OWU student Alex N. Mason, she preferred Kapow because “it had more movement.”

Mason’s friend, freshman Sara Cordle, agreed. “It was more like a puzzle-like you had to duck not duck, you know.”

Student turnout was lower than expected at the beginning of the event, but two board members said this did not have much to do with the game itself, but more to do with the weather on Friday afternoon. It was sunny and hovering somewhere between 80 to 90 degrees outside.

The Campus Programming Board is responsible for quite a few activities that Ohio Wesleyan promotes on campus for the students.

“Last semester we put on Day on the Jay…and we brought in one of these I don’t wanna call them blow-ups, but blow-ups or inflatables I guess, and a lot of people liked it a lot,” said club member Qiukui Moutvic. “So we decided to base an event on something like that and then we just decided to call it Wesleyan Wipeout.”

Last fall the club took a tour of the SuperGames warehouse during one of its retreats and had the chance to try out some of the inflatables. It was from this retreat that the idea for Wesleyan Wipeout was born.

When asked if there might be more events like Wesleyan Wipeout in the future Moutvic said, “We have staple events every year, so events like these are more of just whatever comes out of our planning retreat.”

The students definitely would not mind more events like Wesleyan Wipeout said, Cordle. “I like the inflatable events that they have and all the games, like from Day on the Jay.”