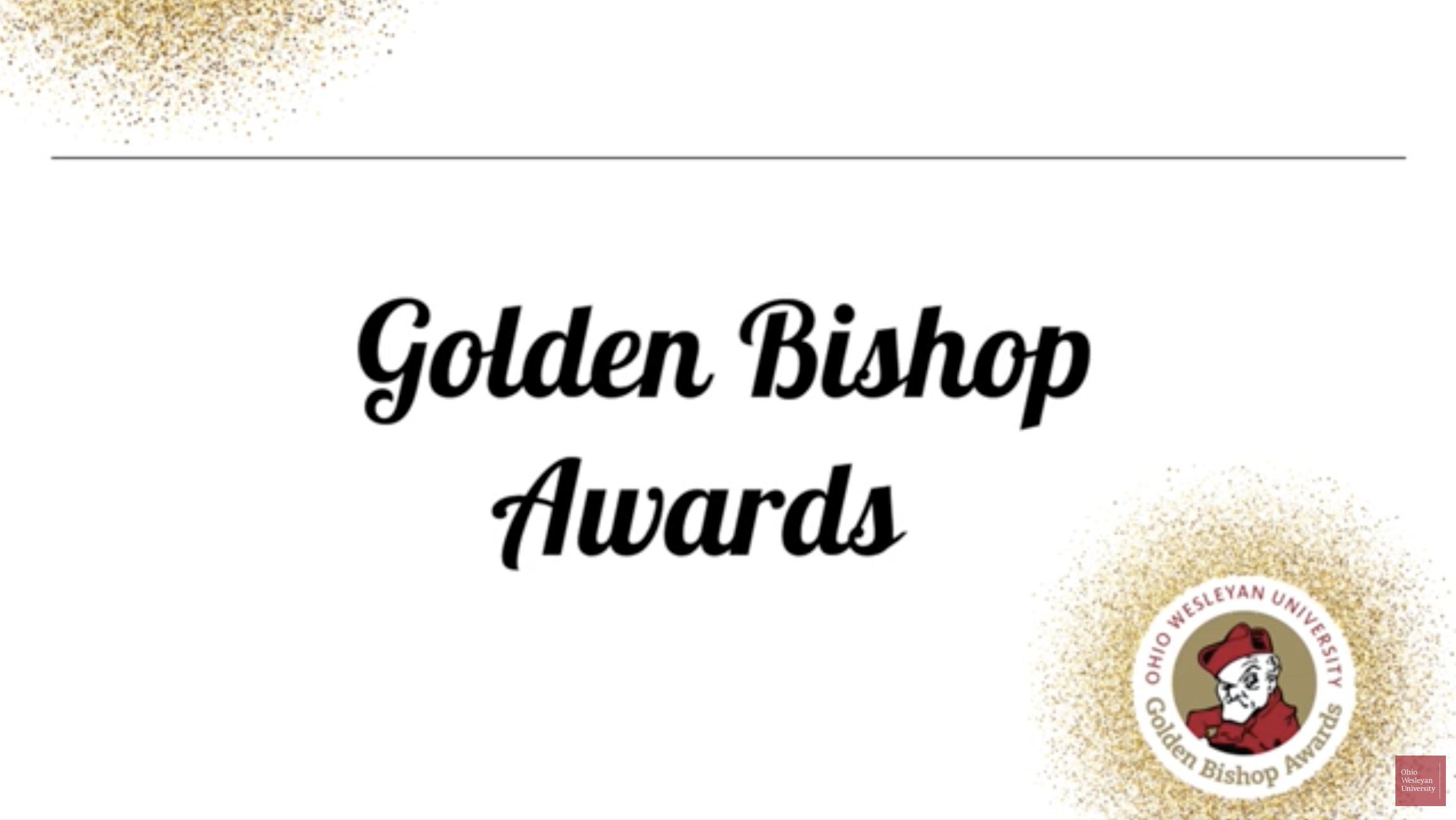 Ohio Wesleyan campus may resemble a ghost town, but that hasn’t ended university events, including the Golden Bishop, Dale Bruce and Phi Society awards, all held for the first time virtually this past week.

Virtual is synonymous with college life now and Zoom, Blackboard Collaborate Ultra and Google Hangouts are just some essential tools the university wields to keep the OWU community together.

For instance, over ninety participants joined the online chat Wednesday to honor students’ achievements for this year’s Golden Bishop Awards.

“Our hearts truly go out to our senior athletes whom may never get the chance to play their so-called last game,” Taylor said.

The first-ever Phi Society Award ceremony was held Friday and will be posted on OWU’s website later.

Ali Mayer, coordinator of Student Involvement and First Year Programs, said many people pitched in to make it successful.

“There have been a lot of university collaborations to make these awards possible, “ Mayer said. “Also, tons of alumni have been invited, who wouldn’t have been able to attend otherwise. Thankfully, we have Zoom and this is able to still happen.”

Fifteen awards were handed out at the greek event, including recognition for Mickey Rice of Kappa Alpha Theta as Sorority Member of the Year, Nevin Horne of Chi Phi as Fraternity Member of the Year and the Delta Gamma sorority winning the Chapter Academic Excellence Award.

Not only award ceremonies are being held virtually, said Dina Daltorio, assistant director of Student Involvement.

Her office posts a list of virtual events and encourages students and organizations to get involved and ask for help if needed. Some events have included things like “Movement Mondays” yoga classes, a resume webinar, TED Talks and other proceedings.

“We are striving to create a sense of community even though students are remaining in constant spaces,” Daltorio said.

Daltorio said she has done her best to adapt with the times, seeking ideas for virtual events through Facebook groups and chat rooms from other colleges and then adapting it to fit OWU’s ideals.

Fridays with Faculty has become a virtual regular and recently included Franchesca Nestor, assistant professor of politics and government, who let students vent political gripes related to the coronavirus.

Nestor said she designed the discussion to be open minded and friendly and available to all.

Other virtual presentations have included astronomy talks at the Perkins Observatory hosted by Don Stevens, its director.

Students have joined the crowd as organizers, too.

Mahnoor Ansari, a member of Citizens Climate Lobby student organization, hosted a movie night to stay connected to his peers.

“We are still connecting OWU and want people to know we care even though we may be thousands of miles apart,” Ansari said.