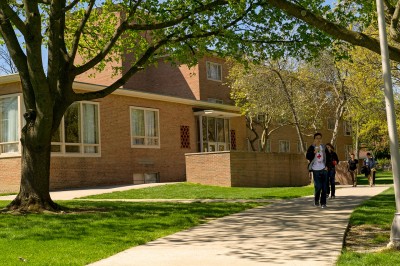 The Delaware Police Department has been asked to increase its patrols of Ohio Wesleyan’s campus in the wake of two racially-charged incidents this week.

The request comes after local police and OWU Public Safety responded to two, separate race-related episodes. Last year, racially-tainted incidents occurred on campus in both the spring and fall semesters.

The most recent episodes occurred in Bashford Hall over the weekend where someone wrote a racially offensive word on a community bulletin board and tore a poster in half, which showed an African American student.

And just before midnight Tuesday, an older man in an olive-green coat and jeans near South Liberty Street and Rowland Avenue yelled a racial epithet and pointed at three students, one white, one black and one Asian. The man ran off behind nearby houses when a PS officer responded.

OWU President Rock Jones and Dwayne Todd, vice president for Student Engagement and Success, were unavailable for comment, but Cole Hatcher, OWU’s director of Media and Community Relations, said the university has zero tolerance for these sorts of episodes.

Meanwhile, Delaware police have been asked to boost their nightly patrols, he said.

“There is no evidence to prove these issues are tied together, but there is some pattern forming here,” Hatcher said. “When an incident like this occurs, it’s important to make sure the students feel comfortable enough to be able to address these types of issues, along with addressing these concerns right away.”

Residential Life office has been meeting with students living at Bashford Hall to discuss any concerns, he said.

Both PS and Delaware police said the two recent incidents are likely unrelated.

“We have no reason to believe either of these two incidents are related to each other and would encourage anyone that might have additional information to give us a call on our tip line,” said Delaware police Capt. Adam Moore.

“Students should never hesitate to contact us when they experience any situation where they don’t feel safe and need assistance,” Bolender said. “Our primary objective is to collaborate with Delaware PD to identify individuals engaged in this behavior.”

Should a suspect be identified as a person not associated with OWU, the administration can generate a no-trespass order barring them from campus, Bolender said.

The most recent incidents follow the vandalism of a diversity bulletin board in Hayes Hall last spring and the posting of 25 stickers with pro-white messages linked to the white supremacist group Patriot Front in November.

Patriot Front has been described as an organization that embraces racism and intolerance. Similar incidents occurred around the same time in November at The Ohio State University and reportedly at other college campuses.

After the stickers were removed, OWU created nine unique diversity posters and placed them around campus. A campus gathering was also held to create community and send a strong message that division and white supremacism is unwelcome. A new series of posters under the ONE OWU Campaign are being created now, said Juan Armando Rojas Joo, campus’ chief diversity officer.