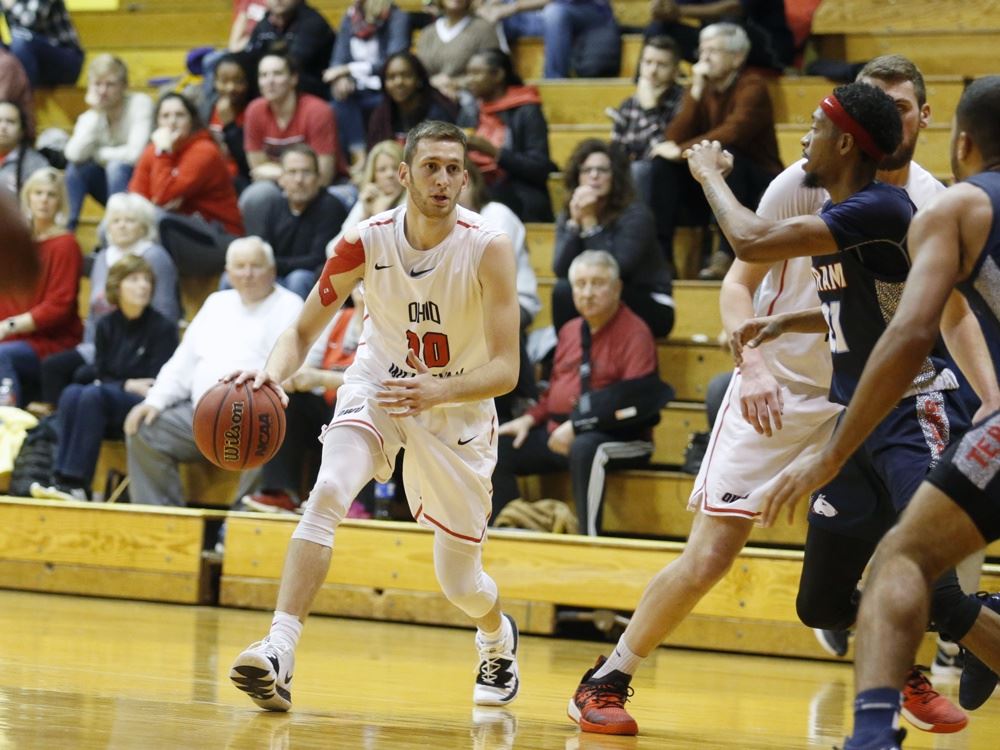 The Ohio Wesleyan men’s basketball team burst from the gate Saturday afternoon, playing with tempo and shooting the lights out in defeating DePauw University 77-55 at Branch Rickey Arena.

The victory extended the Battling Bishops’ winning streak to three. Freshman power forward Grant Spicer led the charge with 16 points and seven rebounds, shooting 77% from the field. Spicer said it was part of the team’s game plan.

“One thing we like to go to is just throwing it into the post,” Spicer said. “Not necessarily even to score all the time, but to just play out of the post.”

One key for Saturday’s win was to move the ball better and get it from sideline to sideline a couple of times, Spicer said.

The long ball was huge for the Bishops Saturday night, with six out of the ten players ringing up three-point field goals. It’s a big part of the team’s offense, said freshman guard Jack Clement.

“Our offense is built around the three point shot, mainly because all five guys who are out there on the floor are able to hit that shot,” Clement said.

Coach Mike DeWitt trusts his players to make those shots because of their chemistry, Spicer said.

“[ He] knows we all have the ability to knock down open shots,” Spicer said. “As soon as somebody gets hot, everyone starts to get into a groove.”

With a focus on pushing the tempo of the game and playing fast, the Bishops ensured DePauw paid for its errors Saturday. The Bishops’ scored 16 points off DePauw’s turnovers while DePauwscored only 2 points off the Bishops’ turnovers.

Clement said the team does agood job of taking care of the ball.

“So we make it a point in our offense to make sure that we capitalize off of turnovers that we do cause,” he said. “So if they make a turnover, we want to make sure that they pay for that, because that’s just a free possession.”

The Bishops will try to extend their winning streak Wednesday at 7:30 p.m. against Wittenberg University in Springfield, Ohio.