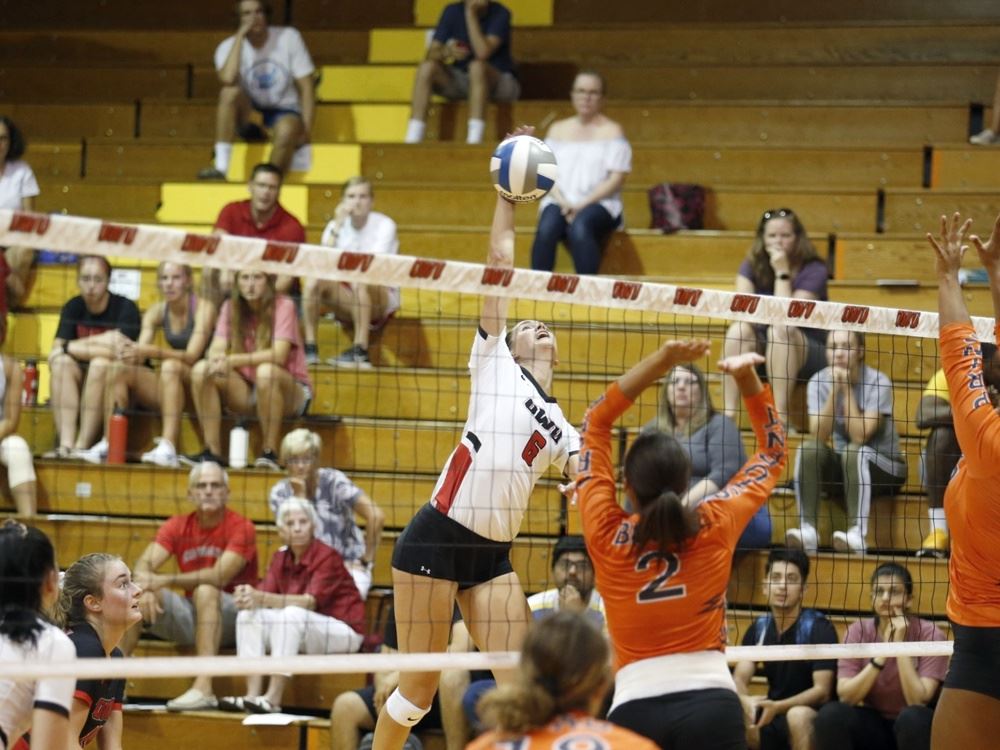 The Battling Bishops women’s volleyball team has it’s first home stand Tuesday night where it faced Heidelberg University. The game is part of a string of  heavy competition for the Bishops according to head coach Kirsta Cobb, “Our first weekend was against top-25 teams in the nation.” This is no mistake either, Cobb explained, “playing tough competition early, the goal of that is to get us ready, mentally, emotionally, physically for the conference season”

Senior captain Jordan Brandt is on the same page with her coach, as she stated, “That’s our goal; to be top 25 in the country we belong in the top two [in the conference.]”

However, junior captain Megan Schwallie, said she feels that they need to step up to the occasion “But we don’t want to settle either.” However, she does see the positives as well “ We found a lot of growth with the teams that we were playing,” Schwallie added.

The third set, however, went down to the very last point. After the Bishops started off the set up 8-3. Heidelberg used momentum to go on a 14-7 run, taking a 17-15 lead in the set.

That prompted Cobb to call a timeout and discuss things with the team.

According to Brandt, this timeout was rather beneficial. “[Cobb] does a really good job of calling timeouts systematically.”

After the timeout, the Battling Bishops gained some of that momentum from Heidelberg and ran with it, winning the set 25-23 on the strength of a 10-6 run, including a 46 second rally on their 20th point.

“A big part of volleyball is the first five points, especially when you have that kind of momentum,” explains Brandt.

Unfortunately, that momentum did not carry into the next set, in fact the Bishops got the exact opposite start that they hoped for.

When asked about the inability to carry the momentum from the end of the third set into the beginning of the fourth set, Brandt said, “It’s the struggle of taking that high energy and high intensity and focusing it.”

When asked about how that many missed serves affected the tone and momentum of a volleyball game, Cobb said, “It’s really hard to build momentum and put pressure on the opponent, if we keep giving them an out.”

Schwallie added, “That many missed serves makes up more than half a game.”

Brandt explained the frustration of these early season struggles. “Unfortunately, we haven’t quite had the results we wanted to. We put a lot of emphasis into these first games, because if we want to get an at-large bid to the national tournament, winning these games is key.”

Even with this start to the season, Cobbs does not seemed worried.“We still have the ability to reach a lot of our goals…We just want to continue to progress and improve each day.”

The Battling Bishops have their next game Friday, Sept 13 at 5 p.m. against the Wilmington Quakers in Branch Rickey Arena as the Bishop Invitational kicks-off.