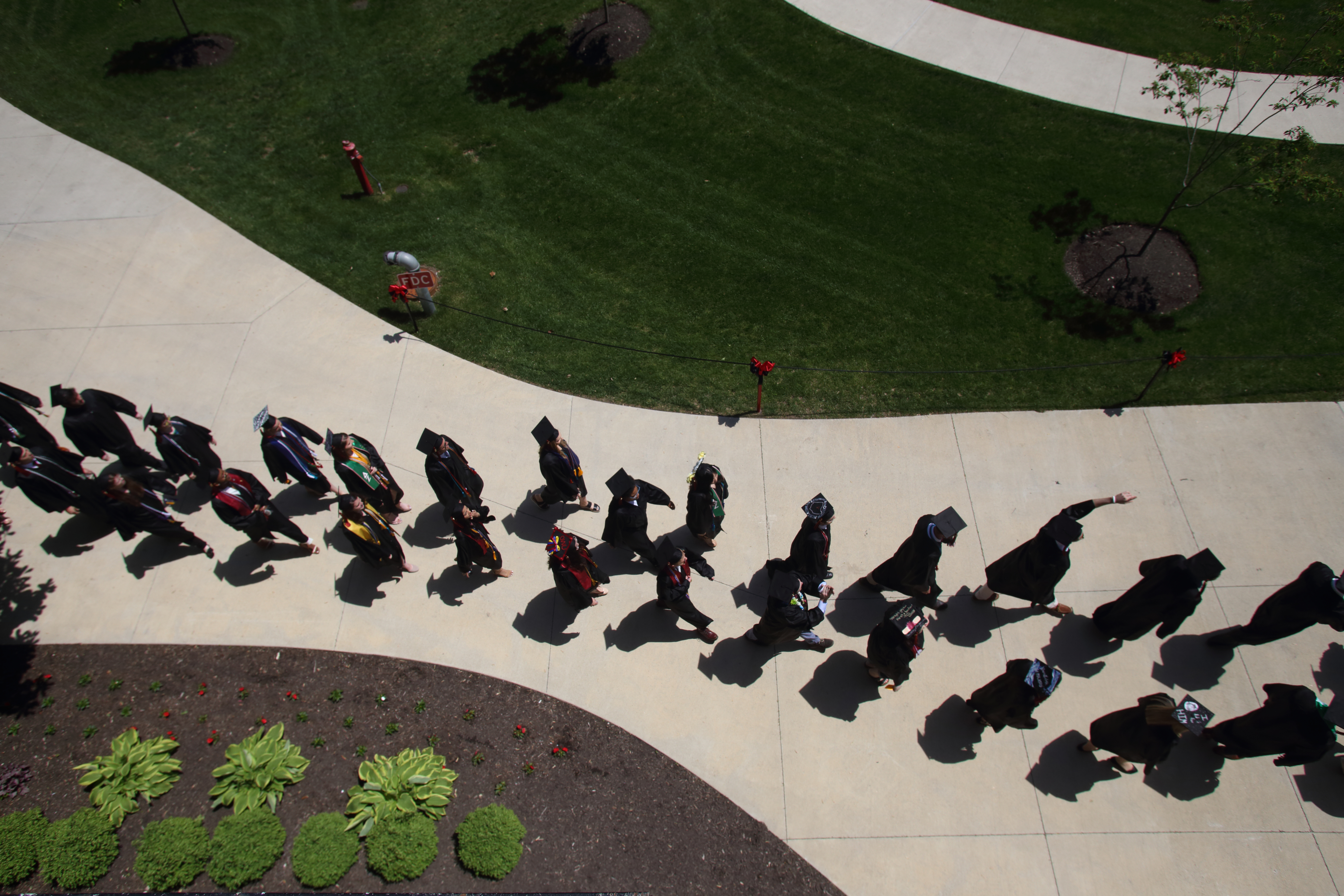 For Ohio Wesleyan’s Class of 2020, closure may be the most difficult of all achievements.

Lost for seniors was the last Day on the Jay, planned send offs from teammates, the final late-night snack with friends at Smith Dining Hall, memorable goodbyes from sorority and fraternity sisters and brothers, a final round of toasts at The Backstretch and just hanging out with close pals one last time.

These and other significant final traditions simply evaporated on March 13 when Ohio Wesleyan closed the campus for the rest of the semester to combat the rapid spread of the novel coronavirus.

The most important lost tradition of all? No May 9 commencement with family and friends to celebrate completion of all the years of hard work, culminating in a well-deserved college degree.

Below some members of the senior class reflect on their final days on campus and plans to celebrate that big day, or not, at home.

Senior Mahnoor Ansari, from Lahore, Pakistan who is still in Ohio, said she has no special ideas for marking graduation, at least for now. But she will earn a double major in pre-law and psychology.

“I don’t have any plans for celebrating,” she said. “I am sad that I’m not getting closure.”

Ansari said she misses the Treehouse, the environmentally-themed Small Living Unit, and its annual paint party, a tradition of glow paint and black lights, and the OWU women’s rowing team.

For Annabella Miller, from Wellington, Ohio, commencement day has lost its celebratory aura. She will graduate early after two years with a degree in pre-theology and minors in women’s and gender studies and psychology.

“Right now, I don’t have plans to celebrate my graduation,” Miller said. “May 9 will probably be like any other day for me and I will most likely work all day.”

To counter disappointment, at least a little, OWU is celebrating the Class of 2020 – for now – with a video and has urged all seniors to send in their photos for it.  A real ceremony will be scheduled for later, when it is safe.

“The video will be shown first on May 9, but please know this in no way is a substitute for your commencement ceremony,” the Office of President and University Communications wrote. “We are committed to not only an on-campus commencement, but also to a full weekend of celebration for the Class of 2020 at a time when we can do that in a safe manner.”

Some, like Amarii Johnson, an exercise science and Spanish double major, don’t plan to wait for the big party and will mark the day with their own festivities.

“I’m going to get lit with my family and my mom and sister just to celebrate being done,” Johnson said.

Johnson, home in Chicago, said like most seniors she is sad about the abrupt end to the school year.

“We didn’t have that time to really mentally prepare ourselves to end this chapter of our lives,” Johnson said. “I think OWU did the best that they can. They could’ve easily just canceled graduation but Rock (Jones) is trying his hardest to get us something even if it’s in the summer or closer to the fall and I really appreciate those efforts.”

Keionna Badie, of Sioux Falls, South Dakota, said she also thinks OWU has done the best it can for seniors under tough circumstances. Badie is a pre-law and philosophy double major and history and politics and government double minor.

“I think OWU has been one of the most understanding colleges for seniors during this pandemic,” Badie said. “I definitely miss my friends. We made plans to do things together to celebrate the end of senior year and I’m sad that we weren’t able to spend our last week’s together.”

Hope Poolos, a health and human kinetics major and psychology minor, said she too has struggled with the way school ended. She has also been challenged working alone from home in Sylvania, Ohio.

“Not being with everyone from OWU in these final weeks before graduation has been really hard on me,” Poolos said. “This was supposed to be our final time with friends and classmates and it is so hard to stay motivated.”

Poolos said she intends to don her cap and gown and have a cookout with her family, boyfriend and other friends on graduation day.

McKenzee Martin, from Urbana, Ohio, said she too misses friends, classmates, walks on the JAYwalk and face-to-face connections with professors.

“I did not realize how much I would miss school until it was taken away from me so soon and I also, surprisingly, miss my dorm room,” said Martin, a psychology major and English minor. “Trying to stay focused and motivated during this time has been difficult for me and it has been discouraging not having my usual academic environment as well.”

Martin is not sure how she will celebrate commencement, but it will include family and friends and a dinner.

Andrew McFarland, a fine arts major from Mount Gilead, Ohio, said the suddenness of the semester shut-down was difficult.

“I know when I first heard the word about the classes being postponed and closed and everything else, I had a lot of pain and hurt just knowing that all of it went away so fast with the blink of an eye,” he said. “I’ve heard from many faculty and others that they had learned the information about an hour or so before we even did as students, and it just seemed jarring that way.”

McFarland said OWU has done a good job with room and board refunds and working to return items to students who left things back on campus. Graduation celebration plans are up in the air for him, he said.

“I haven’t put much thought into it actually,” McFarland said. “Right now, I have been stuck inside for the last few weeks with my girlfriend and it’s almost blanked on me that I’m actually graduating.”

Mickey Rice, a neuroscience and psychology major from Louisville, Kentucky, said she misses the daily activity of being on campus.

“I find myself getting antsy and stir crazy at home, which makes it especially difficult to do my school work,” Rice said. “I miss my roommate, my housemates, going to Smith late at night with friends, getting breakfast and walking to class together.”

Rice said she could probably “list off hundreds” of things she misses about OWU, but the senior celebrations would be at the top.

“I’m really sad to be missing out on the celebratory moments that I thought I was going to have,” Rice said. “My sorority and the Frisbee team do a number of special things to honor the seniors that I was really looking forward too. I’m so sad that we did not have that time together and that we could not celebrate each other in person.”

Erica VanHoose, an exercise science major and zoology minor from Marysville, Ohio, said she will never forget her time at OWU and all the friends she made.

“I miss not being able to experience the senior activities and the feeling of enjoying all the lasts of senior year before they are gone,” VanHoose said. “I think the best decision OWU made is making sure that us seniors still get an actual graduation ceremony. I’ve been looking forward to that day for four years and can’t wait to walk across that stage.”