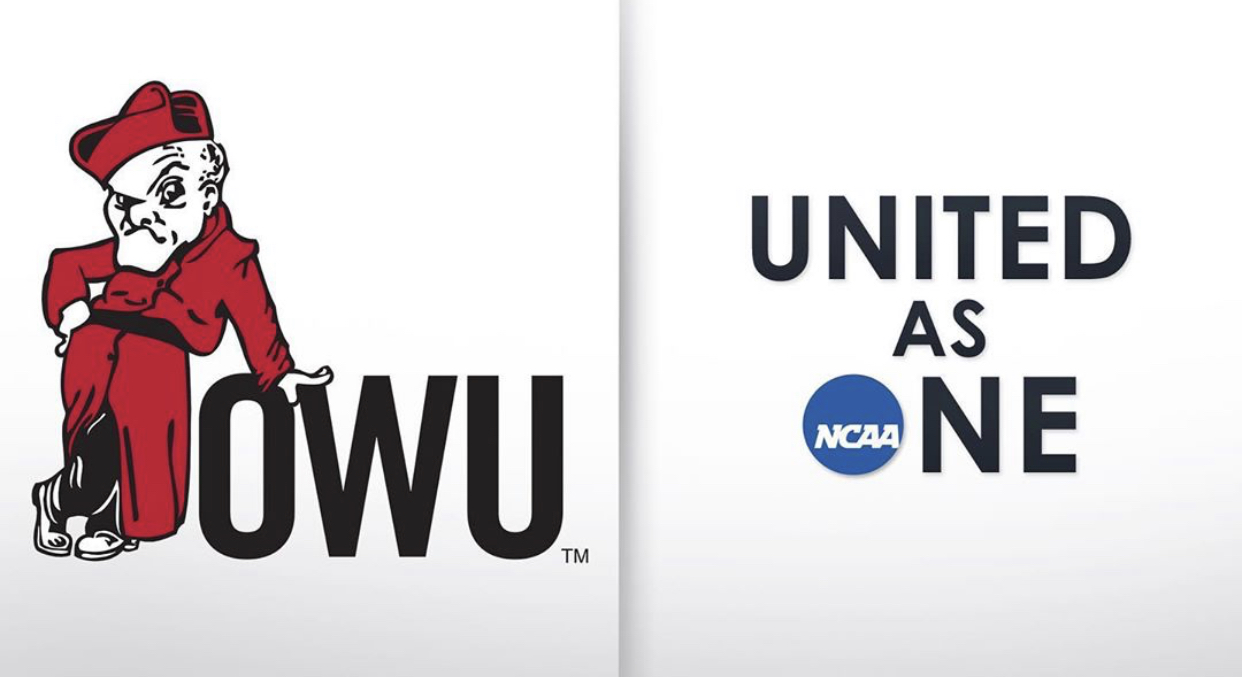 When the novel coronavirus closed Ohio Wesleyan, all athletic events ground to a halt for the remainder of the spring semester, wiping out the aspirations of more than 500 athletes from 25 teams.

The abrupt ending to the season sent everyone packing, heading back home while leaving many heartbroken and devastated. For senior athletes, the last semester of playing for the Battling Bishops vanished before their eyes.

Senior Cirrus Robinson, a four time national champion with five All-American titles in women’s track and field, was at the nationals meet in Winston Salem, North Carolina to compete in the high jump when she heard the news.

She never got the chance to compete – the meet was canceled after the team arrived.

“I was surrounded by athletes, many that I know personally by now, with their chances taken from them in real time,” Robinson said. “There were people crying outside and in the hallways. Everyone was on the phone. It was heartbreaking, especially because in retrospect it was only the tip of the iceberg.”

Robinson, who’s participated in six national track and field competitions, said it’s difficult to accept the fact that her time competing for OWU has ended.

“I have zero regrets or longings about my career as a Bishop,” she said. “That said, this is still not easy. My teammates, who are everything to me, deserved more chances to shine and show themselves this season.”

The NCAA has granted another year of eligibility to spring sport seniors, she said.

“I know many of my friends in the NCAC and NCAA will be using this to finish what they started,” Robinson said. “I’m so happy for them and I will surely be hanging on the fence to watch them achieve their goals.”

Most student athletes accumulate a long history of work, so this abrupt ending to the season was heartbreaking, said Julia Dickman, a sophomore on the track and field team.

“This is my first season off from sports in 12 years,” Dickman said. “I’ve never not known a spring or fall season without games, meets or being with my best friends and my teammates.”

Ashley Smiley, on the women’s track and field and soccer teams, was in Belize for a travel learning course when she heard the news. She initially thought everything was being blown out of proportion.

“When I heard that the spring season was cancelled, it didn’t seem real,” Smiley said. “Once I came back and saw how rapid everything was spreading, I understood the decision in order to try and keep everyone safe and healthy.”

OWU’s men’s baseball team was in Florida competing when these rapidly escalating events initially caught senior right handed pitcher Justin Grubb by surprise. But the reality of the season’s end didn’t take long to set in.

“I pretty much knew when we had two games left in our Florida trip,” Grubb said. “It was pretty hard because I had pitched the day before and didn’t think that it would be my last.”

Initially speculation circulated that the season would only be postponed.

“At first I thought the decision was very quick to the trigger and not necessary to cancel an entire season,” Grubb said. “However, it doesn’t seem like this virus is going to go away anytime soon, so in the end they made the right decision.”

Despite the strange and sad position seniors find themselves in, Grubb was able to recall fondly his time playing collegiate baseball.

“I’ll remember all the stories I’ve had with my teammates over the years, and how much we’ve grown and changed in just four years,” he said. “College athletics has not only allowed me to continue to play the game that I love, but also has given me friendships that will last forever.”

As much as senior women’s softball pitcher Kendall Kaiser is sadden by the end of the season, she said valuable life lessons can be learned.

“Having my senior softball season cut short so quickly helped me realize to never take things for granted,” she said. “Luckily, I was informed of the news before I had played my final game, so I was able to change my mindset to just play because I love the game and to play with confidence,”

Delivering the unwelcome news to athletes was an emotional task for coaches, said Mike Plantholt, coach of the Ohio Wesleyan men’s lacrosse team.

“We brought everyone into Branch Rickey arena and I had them sit on the bleachers … I just tried to be straight up and to the point with them on the developments,” Plantholt said. “In our program we try to tackle situations and problems head-on and focus on the things we have control over.”

Though emotions and tensions were high, Plantholt said he went about the situation as calmly and rationally as possible.

“At that point we had zero control over the season being cancelled so we just focused on the next steps. It was just business as usual,” Plantholt said.

Finding a positive, Kris Boey, coach of the men’s and women’s track and field teams, said he believes this extra-long offseason could have benefits.

“I expect it will leave our team hungry and wanting more,” Boey said. “We will re-establish our purpose and prepare in an even more meaningful way.  I expect we will be even better due to this experience.”

And as we live through one of the most rapid spreading pandemics in the world’s history, Plantholt has a message for everyone who may be feeling scared or overwhelmed.

“This quarantine will not last, but our team, the Ohio Wesleyan athletics program, and our university will,” Plantholt said.