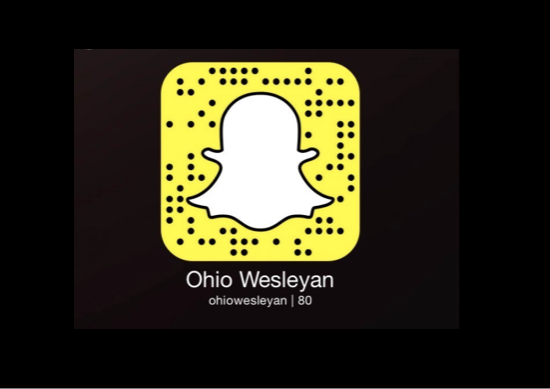 Snapchat, with its growing popularity, has swept over Ohio Wesleyan’s campus and is telling OWU’s story all over social media.

The account was launched in the summer and gave students who were not on campus a glimpse of Merrick Hall and its renovations.

Initially, the app’s usage underwent a trial period and a few students were asked to try it out to gauge people’s responses.

“I like OWU Snapchat because I think it’s a way to connect with the current student body and encourage pride in our campus,” said senior Venessa Menerey.

Senior Julia Stone, who runs the OWU Snapchat, said it was challenging at first because she was unsure of what to include.

“Luckily, my friends were full of good ideas such as footage from an open mic at Choffey’s or the opening of an art show in Edgar Hall,” Stone said.

Stone said she enjoyed the experience because it forced her to get out of the comfort of her room and to “seek out adventure, fun and excitement at OWU during homework breaks.”

Since the initial trial period, the “My Story” feature on Snapchat has gotten about 140 viewers. Jessica Vogel, the student social media intern at the communications office, said she hopes this number will grow with time.

Students have used Snapchat for seven days to actively tell the OWU story and give a clear depiction of some of the events that happen on campus on a regular basis.

The mission of the weekly takeover is “to be flexible as we explore the best way for students to share their ‘My Story’ with classmates and future students,” Vogel said. “We want to create a program that is more than just a ‘take-over Tuesday.’ We want to see a real week in the life of an OWU student.”

The OWU Snapchat has one intention with this new social media account.

“The main goal of the account is to spread a sense of community and reach out to prospective students in a way that is authentic and fun,” Vogel said.

So far, some of the users of the account include Nicole Sanczyk, Stone and Emily Feldmesser, the chair of public relations during Mock Convention.