Owned by Joanne Meyer and her son Kyle Meyer ‘02, an OWU alum, The Backstretch is populated daily with OWU students and local customers.

According to their website, the Meyer family understood that frequent customers using the space for a quick drink at the bar also wanted food.

Though The Backstretch is limited on space, they installed a full-service kitchen over two years ago, allowing the bar to provide a full and seasonal food menu.

Since the kitchen has been installed, The Backstretch has rebranded their logo and updated their website.

“This was just a natural progression,” Meyer said. “The food business has really taken off and so it was a natural evolution to update the 20-year-old logo to incorporate all aspects of the business.”

As for future changes, Meyer said there is always room to improve.

“Last year, we also had been focusing on the outside: updating, painting and installing the patio,” Meyer said. “This year’s plans are for updating and doing some things to the inside of the premises.”

Meyer said they have received positive feedback on their efforts to update The Backstretch.

“It has been overwhelmingly positive,” Meyer said. “Everyone has agreed the progression of updates and changes we have made in the past couple of years has been great.”

“We have had alums in and they have all liked the new logo and the food,” Meyer said.

OWU senior Cait Burton-Dooley said she thinks the rebranding is strange for students.

“The Stretch has always been a bit seedy and knowing that it’s been cleaned up feels a little like we’re losing some-
thing,” Burton-Dooley said.

However, Burton-Dooley said the changes will not stop her from going.

“I’ll still go because their food is good and their drinks are bomb,” Burton-Dooley said. “It’ll just take a little getting used to.”

In addition to The Backstretch changes being different for students, the list of restaurants allowing students to use their OWU meal points has been updated for the semester.

This list leaves out El Vaqueros, typically on the off-campus dining program, due to technical difficulties with the card reading system, according to Tumeo.

As for The Backstretch, Meyer said they would not be opposed to joining the program, but do not know what it entails.

“We have talked about it in the past, but haven’t had the time to get with OWU to learn about the system,” Meyer said. 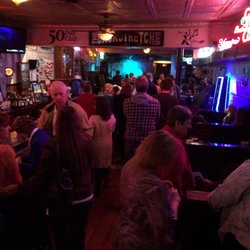 It is finally spring where the weather is getting warmer and the school year is winding down. It is also that time of the year when Backstretch Bar hosts its annual 50-Day Club event.

This year is the 13th annual 50-Day Club where 57 people signed up to participate. The deadline to sign up was March 21.

The even is open to Ohio Wesleyan students, Backstretch employees and Delaware residents.

Every day, participants are required to spend at least 30 minutes at the bar and order two beverages during each visit for 50 consecutive days. But participants are granted three excuses that must be requested and approved before missing a day.

The event began 13 years ago when two employees, who were also OWU students at the time, created a competition between each other to see how many days they could attend in a row.

The competition lasted 23 days until they were both unable to attend.  The bar owner, Joanne Meyers, thought it would be a great way to count down the days until graduation.

She said there are roughly 50 days left of school after spring break, which is when senioritis really kicks in. It has been a tradition ever since.

“A lot of what we stress and what we really promote is kind of developing like a little family unit,” Meye’s said. “It builds a very nice little community of people that you probably wouldn’t have been involved with.”

There are also more interactive activities that are optional such as the elite club.

The elite club is designed for dedicated participants. All participants are given Sundays off as a day of rest. But elite members are required to attend for 50 consecutive days, which includes Sundays anytime between noon and 2 p.m.

There are also team competitions on Wednesday nights for around two hours. For this optional activity, students are randomly divided into groups. Since employees and town’s people make up a smaller portion of the group, they are equally allocated in groups.

The groups compete in these weekly activities which vary each week. At the end, the winning team members get to sign and add some decoration to the winning trophy.

Senior Bridget McQuaide said she is excited to participate in the event for her first time.

“I think that 50-Day Club is a really good way to give seniors an opportunity to do something fun together everyday up until graduation,” McQuaide said. “It’s definitely something that you have to dedicate yourself to, but it’s a really awesome experience where you get time everyday to make more memories with friends and maybe even people you haven’t talked to since freshman year.”