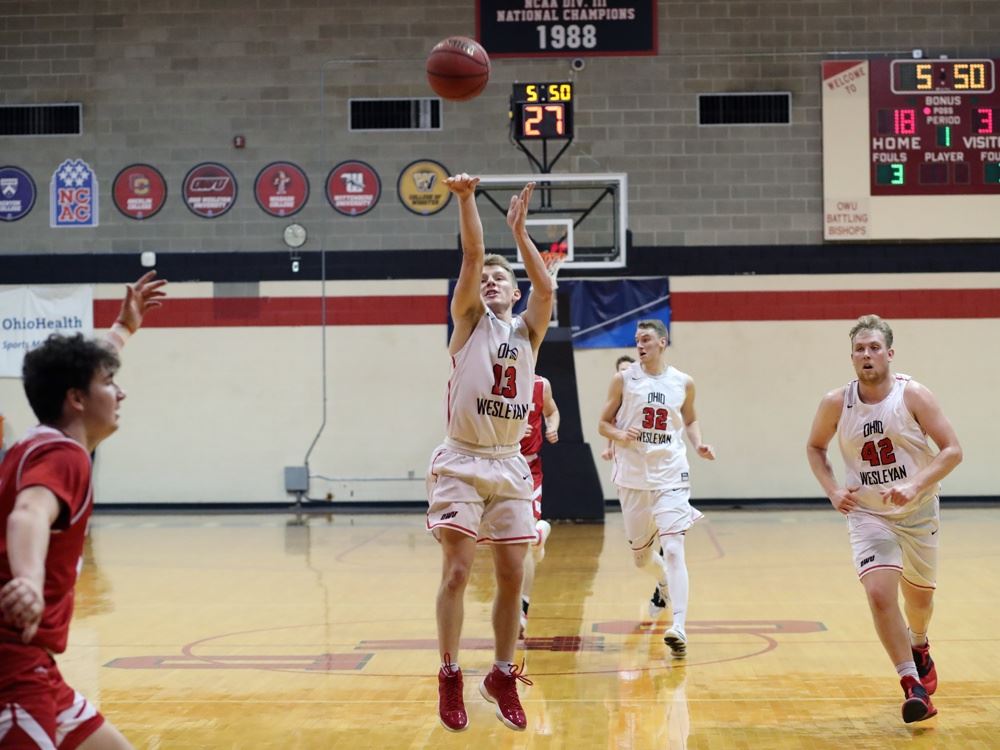 The game appeared to be spiraling out of control halfway through the first half for Ohio Wesleyan’s men in their basketball matchup against Wabash College Wednesday night.

The Bishops’ trailed the Little Giants of Wabash 24-7, but they stepped up the pace before the half ended and also in the second half. Although it was close at the end, it still wasn’t enough and OWU lost in Branch Rickey Arena with a final score of 80-77.

Senior guard Jaret Gerber led the way for the Bishops, scoring 17 points on the strength of five three-pointers.

The poor start was partially due to the Bishops’ shooting 5 of 22 from the 3-point range in the first half. That shot eluded the Bishops as they finished the game shooting 11 of 44 from 3-point range.

“Our offense is very high volume, we take a lot of shots, we shoot a lot of threes.  Some nights, it’s just not going in,” said freshman guard Jack Clement.

During the second half, Gerber and Clement created momentum after trailing at the half, 37-31. A layup by Clement tied the game at 39 after a quick 8-2 run to start the second half.

“When we’re out there running, when we’re getting up and down, that’s when we’re at our best,” Clement said.

The Bishops’ and Little Giants’ battled for the rest of the game, but Wabash was able to maintain a double-digit lead for the most part. Freshman point guard Bryson Lane hit some very important shots down the stretch, scoring 11 points in the second half.

The Bishops relied on the strength of their defense and the hot hand of Gerber down the stretch.

“When Gerb gets hot, he gets hot,” Clement said.

Gerber knocked down three triples. The Bishops’ aggressive play brought the team within one point with 14 seconds left, forcing them to foul Tyler Watson of Wabash. Watson nailed both free throws to give the Little Giants’ a 3-point lead with 11 seconds left.

The Bishops’ had one last chance to tie the game and send it to overtime, but a heavily guarded corner three from Lane was no good. Time expired and the Bishops’ had come up just short.

“We drew up a really good play, we just didn’t get open,” Clement said.

The Bishops’ next game is at 3 p.m. Saturday against Hiram College in Hiram, Ohio.