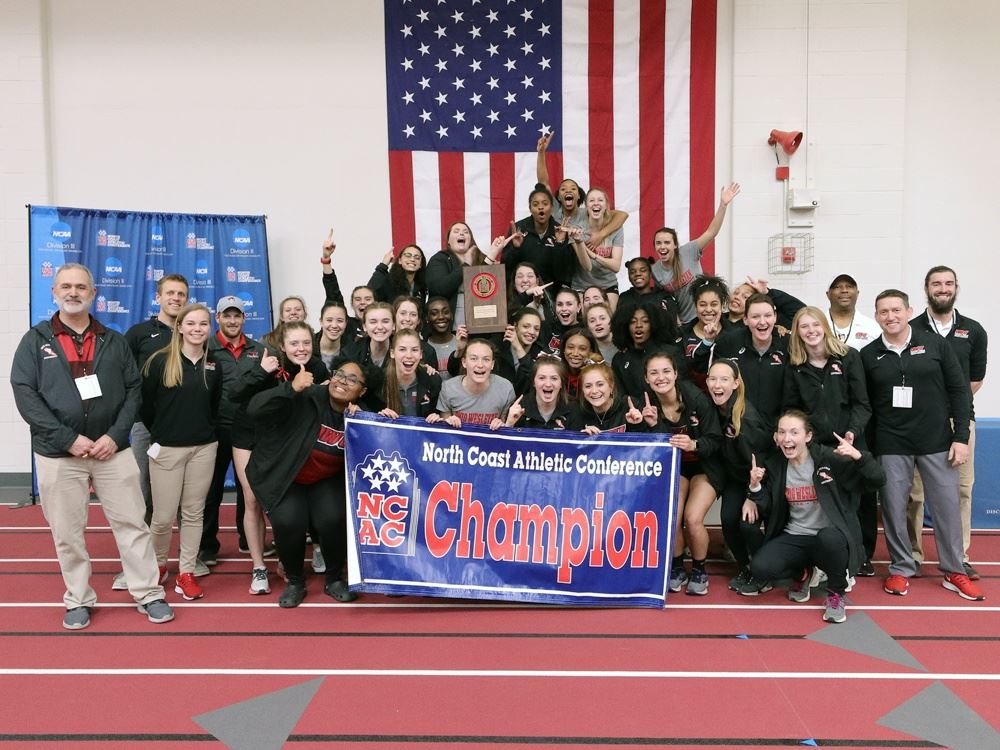 It’s been a big week for Ohio Wesleyan’s women’s track and field team.

And this past weekend the team won the NCAC championship meet at Denison University in Granville, Ohio, topping Oberlin College 175-to-167, as senior Cirrus Robinson repeated as conference champion in high jump and the 400-meter dash.  It was Robinson’s fourth straight NCAC title for the high jump.

Complete results, including the success of the other members of the team, can be found here.

Also in recognition of the team’s performances, the NCAC named coach Kris Boey “Coach of the Year,” the 30th  time he’s earned that recognition and his 10th time for coaching women’s track and field.

Boey was brimming with confidence before the weekend meet.

“This team can be a championship team,” Boey said. “We simply have to be us.”

The week started off with the record-breaking win for Owens, who was also confident about the team’s overall chances to nab championship this past weekend.

“When we are at our best, no one can touch us,” Owens said. “It will come down to everyone making the decision to be at their best, putting it all on the line for the win.”

Boey said he cautions his team never to look too far to the future and did the same with Owens before she broke the school record.

“One event at a time. After she completed the last event we knew it was enough.  We were thrilled for her,” Boey said.  “I told her that persistence pays.”

During last Sunday’s meet, Owens was informed that she would have to make some serious changes to her pace if she wanted to make history.

“My coach had told me … if I wanted to win, break the school record and qualify for nationals, I had to run a 2:30,” Owens said. “This was fairly ambitious for me because it would require me to drop 8 seconds off my time, but he believed I could do it.”

Owens embraced that belief and also won the 60-meter hurdles over last weekend. She acknowledged the support she received from her peers for all of her wins.

“I took one of the biggest risks I ever have while doing this sport and the reward made it so worth it,” Owens said. “I feel humbled and grateful that I have coaches who push me so I can push myself.”

While Owens has achieved plenty of individual success, she has also helped lead and inspire her team with her talent and by helping teammates focus on a common goal.

“Courtney is the best overall athlete in the conference as the NCAC champion in the pentathlon with a national level performance,” Boey said. “She can take her talents in those individual event components to make an impact in a wide variety of ways.  Courtney has become a leader, and is helping gather our team around a vision.”