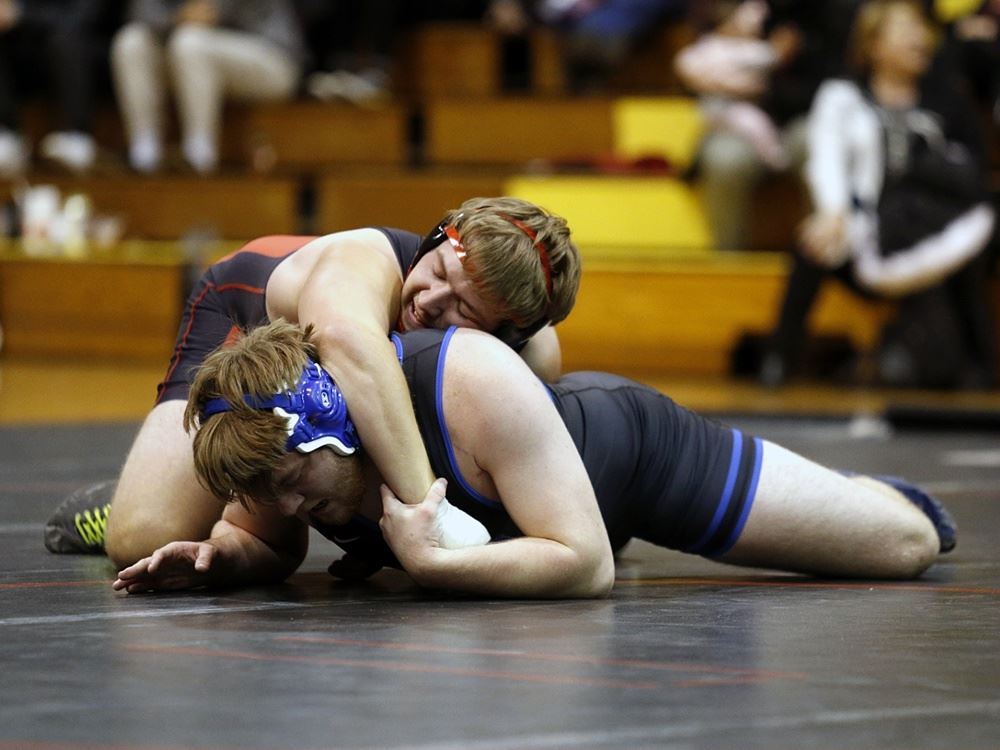 “I felt excited because I knew all of the guys on the team were excited,” said coach Paul Reid. “Wrestling had been absent from Ohio Wesleyan campus for a long time. It was fun to be a part of the event.”

Sophomore wrestler Nathan Scott came from a dominant high school team where he said the home meets were always filled with energy and he wanted Ohio Wesleyan’s meet to be the same.

“I was marketing the meet really hard all over social media and word of mouth around campus,” Scott said. “I wanted everyone to experience it. A lot of people came and supported and the gym was really loud.”

Not only did Ohio Wesleyan host the first home meet in 35 years, but also this is the second season wrestling has been back on campus after being absent since 1985. The sport was brought back as a way to help bolster the university’s student recruitment efforts and as a men’s team to balance a new women’s team in competitive rowing, which is required under federal law.

“At previous coaching stops in my career, I have assisted in both starting and rebuilding a program,” Reid said. It is difficult to start up again from scratch, but all it takes is hard work. Not just me working hard but the current members on the team also.”

Sophomore wrestler Bryce Wittman said Coach Reid played a big role in his decision to come to Ohio Wesleyan, but he also liked the idea of being on the first team since the 1980s and being a trailblazer for the program and the school.

The wrestling team has had four meets so far and much like any other team, it has set goals for the program as a whole.

“The goals are the same regardless of the year or season,” Reid said. “The expectations and standards always stay the same. Get better at every opportunity and approach everything with the right attitude and effort.”

The wrestling team will participate at the Baldwin Wallace Invitational in Berea, Ohio on Nov. 23.

Of all the sports and clubs offered at Ohio Wesleyan University, wrestling is not one of them. That changed when sophomores Ifa Abduljelil and Josh Pyles started the wrestling club.

The club currently has 24 members and practices from 6–8 p.m. Monday, Wednesday and Friday with a Sunday practice from 4–6 p.m. All practices are held in Branch Rickey Arena.

“I was really surprised (with the turnout),” Abduljelil said. “I mean, wrestling is a big thing, but I didn’t expect 24 guys to be signing up at a small school like this.”

While setting up the club has taken some time, and there are currently no wrestling meets scheduled, a major accomplishment has been made – the wrestling club found a coach.

Tom Josefowicz, the new coach, has been an athletic trainer for OWU since the fall of 2009.

“I’ve known Tom from football and track. He has the famous cauliflower ear so when you see that you have to talk about wrestling,” Abduljelil said.

He continued by saying that Josefowicz was very excited that someone finally started a wrestling club and that students who are interested will finally have an opportunity.

“I look forward to getting in shape and sharing different techniques with other wrestlers,” said junior Soma Yoshida, who is studying at OWU for a year. “I’m from Japan so it’s good for me to wrestle in a different style.”

At this time the goals of the wrestling club are to continue to practice consistently, schedule meets as early as the spring semester of 2015 and establish wrestling as an official sport at OWU.