The applause – which engulfed the Benes room of the Hamilton-Williams Campus Center – was directed towards the keynote speaker, Morris P. Fiorina, a professor at Stanford University. Fiorina’s lecture was titled “Unstable Majorities, Polarization and the Contemporary American Electorate”.

The event was co-sponsored by the Ohio Wesleyan department of politics and government and the Arneson Institute for Practical Politics and Public Affairs.

Fiorina began the lecture by emphasizing that the political structure between democrats and republicans 50 years ago was not as extreme as it appears to be today.

For some in the crowd, that took a little while to sink in.

“I’m still trying to process it,” said sophomore Liam McNulty after the lecture. “I never truly realized that it hasn’t always been (polarized) like that.”

Fiorina continued by saying that polarization, in its most basic form, is not believed by some political scientists. He went on by presenting data that supports the claim that it isn’t as extreme as commonly thought.

The data showed that when it comes to key political issues, voters tend to hug the middle. This trend was also similar with the two major political parties.

Fiorina used the political issue of abortion to represent how some in the Republican Party have changed their view over the years, with many clinging to middle ground.

“It’s really interesting to see how polarization in congress isn’t really representation of the general population,” senior Robert Bartels said after the lecture.

Fiorina showed via slideshow exactly how the American people get their political news: Of those getting their information from the extreme sides of the political spectrum, only 1 percent out of millions of viewers get their news from FOX News with just 0.3 percent getting it from The Rachel Maddow Show on MSNBC.

He then referenced a study done on 1.2 million Bing toolbar users, of which only 14 percent clicked on 10 or more news articles and only four percent on two or more opinion pieces.

“The real problem in America isn’t if they get biased news, it is if they get any news (at all),” Fiorina said.

Fiorina finished the lecture with a theory as to why neither major political party can keep the Senate, House or presidency for consecutive years since 2000.

“We have very sorted parties and the result is they overreach,” Fiorina said.

He elaborated by saying that each party tries too much during their respective times in office and it is usually not what the American people want.

“There is a disconnect between what the American people want to work on and what the politicians address,” Fiorina said. “People never really think we are on the right track.” 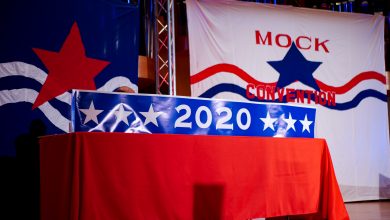