If you ask students what makes OWU special, many will say the community; the lasting bonds they have formed with people, in and outside the classroom, who have humanized their experience here. And many will say that staff people are a vital part of that community. In addition to keeping the university running in so many crucial ways, staff people have hosted international students for Thanksgiving, served as (official and unofficial) advisors, guided student clubs, ran sound systems for student bands, and offered understanding ears when students needed someone to listen.

Unfortunately, for various reasons, many dedicated staff people recently have had their positions eliminated. And many have been terminated after years of service, without the campus community having had a chance to recognize their contributions or thank them for their service.

Patricio (Pachi) Plazolles is one such staff person who, in his 26 years here, touched many people across the university, but whose position was recently eliminated. For many of us, Patricio’s abrupt departure left a gap in the OWU community. Some of us would like to thank him and recognize the many ways, above and beyond his duties at the Woltemade Center, that he contributed to campus life.

Students and alumni remember Patricio as both a mentor and friend, who invested his time in students and the community. Patricio was the advisor of the OWU Marketing Group (OMG) for the group’s entire existence, said a past president of the group, and he helped many of us to get practical work experience through the group’s projects. He guided us in succeeding academically and professionally, other students and alumni emphasized, but success was not enough; he wanted us to succeed with integrity, excellence, and a sense of service to others. One successful alumna identifies Patricio as the reason why is she is where she is today.

Patricio always knew what to say and how to connect with people, remembers one student.

When he walked around campus, people always approached him as if he were a great friend they hadn’t seen in awhile. Another alumna remembers visiting Patricio’s small homestead farm and remembers how his dreams to better the world inspired her in her sustainability work. A faculty member echoed these views, describing Patricio as one of the most sincere and honest human beings he has met. Patricio’s departure is truly sad and disappointing, they agreed, as Patricio had so many skills and virtues, and he truly represented the Ohio Wesleyan spirit.

Another student identified Patricio as an “incredible role model” and one of the key reasons she majored in economics. I never once saw him give up on a student or a student project, she says.

He is encouraging while also challenging people to do their very best. When she had an idea for TiPit grant to study social entrepreneurship and micro­financing, Patricio was immediately on board, helped her and others to design a workable project, and reached out to friends in Peru to make the project a success. It was a great honor, she said, to travel to his home country with him and see the tremendous respect that his friends, family, and local professors have for him.

Patricio and others who recently have lost their positions here will be missed.

OWU a great place to do business

Perkins Observatory: the place for space 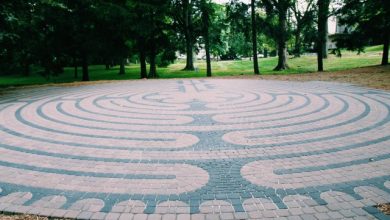 Letter to the editor: the labyrinth