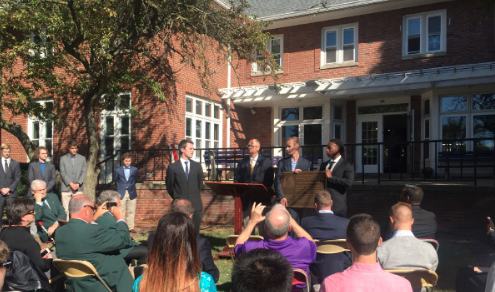 Delta Tau Delta (Delt) Fraternity celebrated their 150th anniversary as a chapter at Ohio Wesleyan over the weekend of October 8.

Alumni and Delt national leaders came from around the country to take part in the festivities starting with the rededication of the house on Saturday morning.

The house, known to Delts as the Shelter, was rededicated in honor of Branch Rickey. Rickey was an OWU and Mu Delt alumni who signed the first African-American player to Major League Baseball.

Blake Andrews, president of Mu Chapter, said the decision to rededicate the Shelter to Rickey was an easy one.

“Branch Rickey represents the values and ideas that all Delts are committed to,” Andrews said. “The impact he had on racial equality in the United States made him the obvious choice when deciding who to honor in our Shelter’s rededication.”

Following the event the chapter had an open house where visitors could view the new renovations done in the house’s living room and library. The house improvements were carried out through a generous donation from an alumni.

That evening a formal dinner was held in the Benes room of the Hamilton Williams Campus Center.

Many Delts and alumni were honored at the dinner and a number of people spoke including OWU president, Rock Jones.

A special Delt ritual known as “Rite of Eyris” was performed by active members of the chapter. The ritual involved teaching the principles that the fraternity was founded on in a formal ceremony.