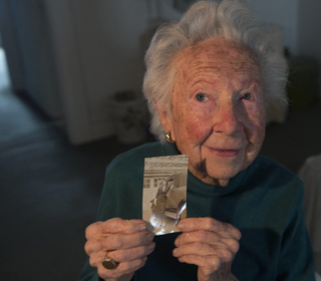 Sellers was born seven years before women were given the right to vote and has only seen men in the Oval Office.

Sellers studied as an English major at Ohio Wes- leyan University from 1932-33, but had to leave before graduating because of the Great Depression.

Originally from Pennsylvania, Sellers decided to join OWU and said she “really enjoyed it here.” She said, “After leaving OWU, I came to New York and took various courses at New York University, but never graduated.”

Since leaving OWU’s campus 83 years ago, Sellers has never been back, but would like to, she said.

“I’ve been a registered Republican, always … but I’m an Independent now … I voted for Roosevelt and Obama and now for Hillary.”

She said she did not care for George W. Bush. “I did not like the war … I did not like his office.” She said she believes firmly in the democratic power to express opinions through voting. “I was not a big political mover and shaker … I didn’t march or protest … I always just voted.”

“I have nothing against women being the president. They are just as smart as men … If she wins, it would turn the page.”

Despite being a Republican, Sellers chose Clinton because she said she thinks Clinton would make a bet- ter president. “For obvious reasons … Trump has no experience … all this sex business is not presidential … [Trump] would not make good decisions.”

Sellers voted on the morning of Nov. 8. “The polling place was not crowded when I went. Freeport, [New York] is a very integrated village … there’s all kinds of people here.”

If Trump does win, Sellers said she is unsure how she would react. “My reaction would be very upset.” But she added she is hopeful. “If we have to go forward, we will. We got out of the Great Depression … so we can get out of anything.”

Her time at Ohio Wesleyan was a difficult one. With the Great Depression setting in, she also had to deal with her father’s death and her family house burned down. But she said she would love to visit again given the opportunity.