A Science Lecture Series speaker traveled across the country to obtain data for a specific study: the drastic changes that California Ground Squirrels and Northern Pacific Rattlesnakes are undergoing in an evolutionary arms race.

Matthew Holding, a Ph.D. student in the Department of Evolution, Ecology and Organismal Biology at The Ohio State University, spoke of his evolutionary findings in the Schimmel/Conrades Science Center (SCSC) last Thursday.

Holding said that the discoveries made in rattlesnakes and ground squirrels help to contextualize the coevolutionary process that produces nature’s diversity of species and their traits, according to the Science Lecture Series website.

To understand coevolution, Merriam-Webster dictionary defines it as “evolution involving successive changes in two or more ecologically interdependent species that affect their interactions.”

For example, the squirrels rub their predators’ shedded skin on their bodies. This “hides” the scent of the squirrel from the snake and makes it harder for the snake to locate its prey.

This adaption has evolved over time and occurs over populations of California Ground Squirrels.

Holding will be defending his findings in a few weeks at OSU. If his thesis is approved, he is finished with the degree-earning stages of his training and can begin to apply for jobs that require a Ph.D., Holding explained.

“My goal is to become a professor at a university, and therefore I need a Ph.D.,” Holding said. “My research will later be published in scientific journals so that it becomes a part of the knowledge base on how predators and their prey evolve.”

Dr. Shala Hankison, the previous coordinator of the lecture series, said she loved the lecture. She said it was great to see a combination of molecular and ecological techniques as well as field and lab.

While speakers come from a variety of science backgrounds, lectures are aimed at general science audiences of faculty and students.

The size of the lectures varies per presentation. Hankison said there is an average of 10-15 people at each lecture, but there could be less if the topic is not well-known compared to a topic that is broadly appealing.

There were approximately two dozen people at Holding’s presentation, many of whom were science majors.

Senior Holly Latteman contributed her opinion on the lecture series.

“I would really recommend the lecture series to all students. Even if you do not understand all the analyses, you will be exposed to other research methods and ideas that may be helpful one day,” Latteman said. “It is also important in the sciences to share and listen to others research to further our knowledge on a subject.”

Lectures take place on Thursdays at 4:10 p.m. in SCSC, room 163. However, Science Lecture Series coordinator Dr. Pamela Pyzza confirmed that Holding’s presentation was the last of the year. 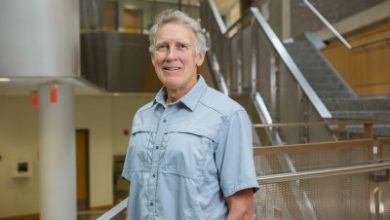 A. John Gatz, Recipient of the Adam Poe Medal