For nine days this summer, 30 members of the Ohio Wesleyan football team traveled to Spain to view local attractions, embrace the culture, enjoy the beaches and play football.

The itinerary for the trip included tours around various parts of northeastern Spain. For seven of those days, the team was in Barcelona and for the other two, they spent time in the beaches in Costa Brava. Tom Watts, head football coach, said he believed the trip overall was a success.

“It was a chance of a lifetime,” Watts said. “I’ve traveled quite a bit and seen a lot of different places but Spain was really gorgeous. We could have been there for another nine days.”

From the players’ perspectives, they got to experience a place unlike home. Junior Chicho Rodriguez, defensive tackle for the Battling Bishops, is from San Clemente, which is part of coastal California. How do the beaches of Spain compare?

“Spain beaches are a lot more packed with people,” Rodriguez said. “There’s a lot more around the beaches than what I’m familiar with. From volleyball, to muscle beaches, to restaurants. They had it all.”

Even though there’s not too much of a football culture in Spain overall, players noted what the sport meant to those who are a part of it. Sophomore guard Ryan Rhodes saw firsthand how big football was to those fans.

“Everyone went out, their side of the stadium was packed just to watch us play,” Rhodes said. “They’re really passionate about it.”

This isn’t the first time OWU football has traveled as a team. Four years ago, the team traveled to Italy. For this year, the team decided on a trip to Spain over the alternative, which was Ireland.

The Battling Bishops play their first game of the season this Saturday at 7 p.m. against Otterbein University at Selby Stadium. 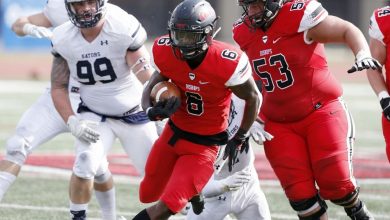