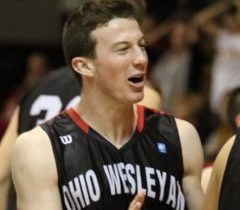 Ohio Wesleyan student athletes are recovering after tearing their anterior cruciate ligament (ACL) this year, preventing them from playing for their full seasons.

Senior basketball player, Brady Roesch, recently tore his ACL during a preseason practice, “I was making a jump stop and came down on someone’s foot and my knee went inward and then popped,” he said. Roesch started playing for the men’s basketball team his junior year and has never had an injury this detrimental before, he said.

“The toughest thing about tearing my ACL is the mental aspect of it all,” Roesch said. “Since I started playing so late into college, I’ve only gotten to play one full season.”

The full recovery time for Roesch’s injury is estimated to be 9-12 months, making it impossible to be able to play during his final season.

Sophomore member of the women’s soccer team, Caroline Elliot, tore her ACL during a spring play day this past April, “I had a breakaway and when I shot the ball, I slid, and my right leg got stuck in grass,” she said. “My knee bent inward instead of outward which is why my ACL tore.”

Elliot said it was frustrating to sit back and watch her team play this fall while she focused on her recovery. “It’s been really hard watching the team, knowing I am not able to play, run, or even pass a ball,” she said.” “I felt like I didn’t contribute to the team this season.”

Being on a timeline is what matters most when recovering from a torn ACL, Elliot mentioned. “I couldn’t jog until four months into my recovery, even though my body felt strong enough,” she said. “I feel ready to be back, but it’s extremely important to not push myself so I can recover properly.”

OWU Athletic Trainer, Niki Budd, says torn ACLs are the most common season terminating injuries for athletes and are even more common, specifically, for female athletes.

“Females are hamstring dominant, which means their quads are weaker and its pulls on the ACL, making it easier to tear,” Budd said.

Contact sports are the most dangerous when examining the large amounts of injuries that occur in them, but ACLs can tear with or without contact. “Majority of the torn ACLs I have seen in my career have been non-contact, especially when dealing with girls,” Budd said.

Budd mentioned “prehab,” or preventive rehab, is the most impactful way to prevent detrimental injuries, like tearing an ACL.