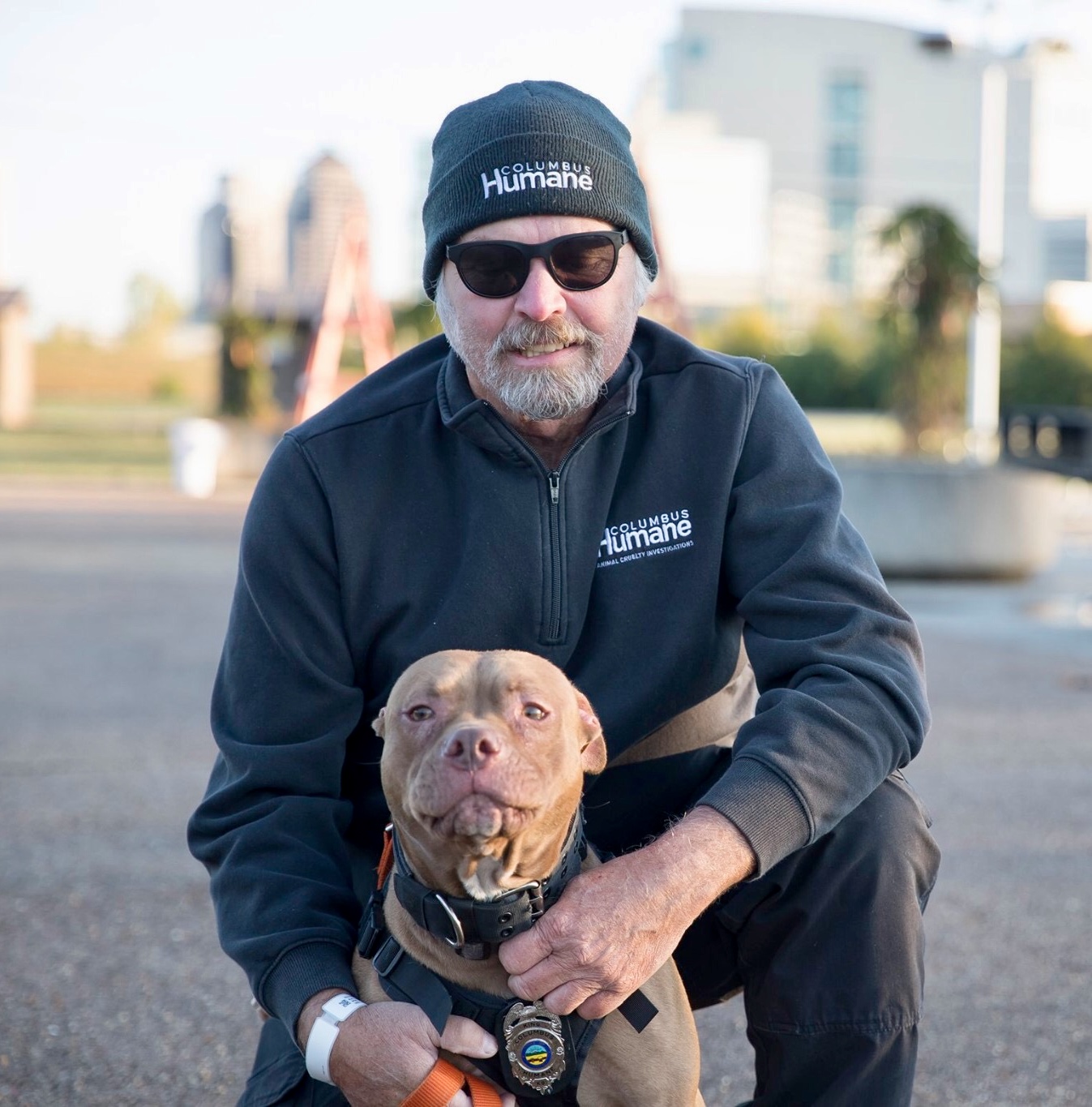 King’s neighbor heard his cries of fear through the walls of a southern Columbus apartment just nine days before humane agents removed the beaten pit bull terrier from the building.

King was lucky. Since his rescue, he has recovered and found a new home. Not all abandoned and abused pets have the opportunity to heal like King did.

Still, while animal cruelty and neglect cases are present in Central Ohio, they are a small percentage of the ways in which individuals in the area have an impact on animal welfare.

When talking about cases of intentional abuse and neglect, Charles Jones, assistant dog warden for Delaware County, said “those are really few and far between type cases for us.”

A greater number of animals in Central Ohio are harmed by a misunderstanding of the proper companion animal care. The Ohio Revised Code describes companion animals as “any animal that is kept inside a residential dwelling and any dog or cat regardless of where it is kept.”

Jana Cassidy, executive director of the Humane Society of Delaware County, said that, although animal welfare in the area is good, more could be done to ensure residents are able to provide the right care for their pets.

“I would say, in terms of companion animals, I think that we’re doing a good job,” Cassidy said. “I think that, as a community, we can do better.”

To solve this problem, legislators in Ohio need to pass stronger laws and Central Ohio counties must provide more education and foster greater community collaboration, according to officials.

The humane societies and animal shelters in Central Ohio look to Chapter 9 of the Ohio Revised Code for information regarding animal welfare. The code states that no owner should willingly abandon or injure a domestic animal, and outlines prohibitions concerning companion animals and cruelty.

Despite such laws, human understanding and mindset about required animal care affects the way in which such humans determine how a companion animal should be treated. Cassidy said Ohio law regarding how individuals view and treat animals is not strong enough to protect animals from harm and neglect.

With a vague legal outline of proper companion animal care, pet owners may develop their own individual mindset on what that care includes.

Mitchell Garrett, assistant dog warden for Delaware County, said, “There is a big push in society’s way of how we have evolved and everything where dogs have become family members…and it’s morphed into dogs are treated like children…but there is a lot of people out there that their dog isn’t their kid. Their dog is their dog.”

Many of the humane societies and animal shelters in the area aim for pet owners to adopt the mindset of their pets being like kids.

Crystal Richie, volunteer for PAWS (Powel Animal Welfare Society), said, “I would love to see more people kind of adopt that mentality that, ‘Hey, my dog is my family. My dog is like a four-legged kid with a tail.’”

However, with such differing mindsets, the way in which companion animals are treated varies from owner to owner.

Various humane societies in the area, such as the Humane Society of Delaware County and Columbus Humane, follow and encourage pet owners to follow the ASPCA’s five freedoms.

Individuals who don’t adopt the mindset of their dogs or cats being family may intentionally or unintentionally neglect their pet from care and freedom that many other pet owners see as necessary.

Todd McCullough, director of the Fairfield County Dog Adoption Center and Shelter, in an explanation of a newly enacted dog licensing policy, shared how difficult it can be to adjust the behavior of pet owners.

The main priority of various shelters and humane societies is to ensure good health of the animals.

“We really emphasize both physical and mental health for the animals,” McCullough said. “That’s a priority for us.”

In an attempt to achieve such a goal, the humane societies and animal shelters in Central Ohio aim to place and keep animals in homes.

Data from 2018 and the first eight months of 2019 show (respectively) customers adopted:

Additionally, the Union County dog warden returned 25 dogs to owners in 2018 and 52 dogs in the first eight months of 2019.

In addition to adoption numbers, the shelters and societies also have significant intake numbers that represent how many animals they bring into their facilities each year.

There are a variety of actions and behaviors that play a role in lowering the number of animals in need and, in turn, the number of animals brought into the various shelters. One remedy that staff at the humane societies and shelters call for is increased education. Such education may cover pet ownership, humane procedures or an understanding of overpopulation problems.

“It kind of all goes back to education on pet ownership,” said Payton Shanaberger, shelter manager for the Marion Area Humane Society. “So, if people kind of reach out to other organizations to get help, whether it’s financially or behavioral training, things like that, it may help animals stay in a home. And if there’s more education, then they know how to deal with their own pets better.”

“The enforcement aspect is pretty much after the fact…but to prevent abuse and to teach compassion and empathy in the schools I think is needed at this point,” Manion said.

Jeff Chambers, director of communication services at the Ohio School Boards Association, said all schools are set up to meet the needs of their local community. So, each school may provide coursework on animal welfare if it is in their interest. However, he also said, because it is not something required by the state of Ohio, not all schools have time for such education.

“In terms of bringing in speakers, probably so,” Chambers said. “In terms of creating a whole new semester coursework for it, I don’t know if they do have the time for that for most school districts.”

Manion also emphasized that knowledge on animal cruelty and neglect is important for the community to have because residents are responsible for reporting such cases to the various humane societies.

“The vast majority of the complaints we receive are from the general public. They’re kind of our eyes and ears in the community to report animal abuse to us,” Manion said.

In addition to knowledge about how to properly care for a pet and how to recognize cruelty, staff members at humane societies and animals shelters in Central Ohio call for greater education about the overpopulation of companion animals.

Richie, involved with the Ohio State Bar Association Animal Law Committee, said one of the biggest problems with animal welfare in Central Ohio is people being unaware of overpopulation. She said that many people get their dogs from breeders while other healthy, and sometimes full-blooded, dogs are available for adoption.

“That can easily be remedied through programs and education and just making the public aware that you can get a really wonderful dog at your local shelter,” Richie said.

Data from 2018 and the first eight months of 2019 show (respectively) agencies euthanized:

The shelters and societies do not euthanize for overcrowding or lack of space, according to officials in Delaware and Marion counties. Euthanasia only occurs when requested by owner or when an animal’s health or behavior cannot be helped or controlled.

The Fairfield County Dog Adoption Center and Shelter works hard to ensure that its population does not get too high so that they don’t have to resort to euthanasia for overcrowding, McCullough said.

In addition to stronger laws and greater education, continued and increased collaboration between the community and animal rescue organizations is necessary in improving the welfare of companion animals in Central Ohio, according to officials.

“Examining the entire organization and reorienting it to having high standards of care for both the animals in our care,” McCullough said, “but also the public, and forming good partnerships with people in the community and rescue groups has been also really critical.”

The humane societies and animal shelters in Central Ohio rely on support from the community.

Cassidy said the Humane Society of Delaware County wants to do better to help out its community, but it is restricted by the resources the community provides.

“I’d love to be able to do more for the community, but we are limited by the physical constraints of our building and the funding that comes along with that,” Cassidy said.

“We’re limited by the support of our community,” Cassidy said. “So, the more they support us, from either fostering, volunteering and of course financially, the more we can do.”

Humane Society of Delaware County 2019 Medical Cost of an Animal

The adoption price for a female dog weighing 40 to 60 pounds is $150 and the adoption price of an adult female cat is $60. After paying for each animal’s medical costs, the humane society does not make profit on adopted animals.

Additionally, the assistant dog wardens at the Delaware County Dog Shelter emphasized the importance of purchasing dog licenses to support the shelter and ensure the safety of the dogs.

James, Delaware County’s assistant dog warden, said, “So dog licenses, the funds that come from that, they run the shelter. They give all the dogs their shots, spays and neuters, they pay for gas in the trucks.”

Franklin County Auditor Michael Stinziano proposed a pilot project that would move the annual registration deadline for dog licenses from Jan. 31 to March 31, according to The Columbus Dispatch. Officials said they hope the change will result in greater licensing compliance.

The employees at the humane societies and animal shelters in Central Ohio encourage such change and support because they are passionate about the safety and wellness of animals.

“We’re in the profession because we care and we want to protect animals,” Manion said. “It’s our primary responsibility, and we strive to make a difference every day.”

He also emphasized the difficulty of the job. “It takes a special person to do these types of criminal investigations because you see the ugliness of human nature,” he said.

Manion adopted King, who after being brought into Columbus Humane, failed the canine good citizenship test he needed to pass to be adoptable. Today, King spends his days at Manion’s side, whether that be in the office at Columbus Humane or camping or shopping on the weekends. Manion said he loves the pit bull terrier.

“I also hope that, you know, he’s a reminder to the agents who rescued him,” Manion said. “The positive impact they make on animals, on the people … having him here every day hopefully reinforces to them the good work that they do as they can see a success story every day in front of them.”