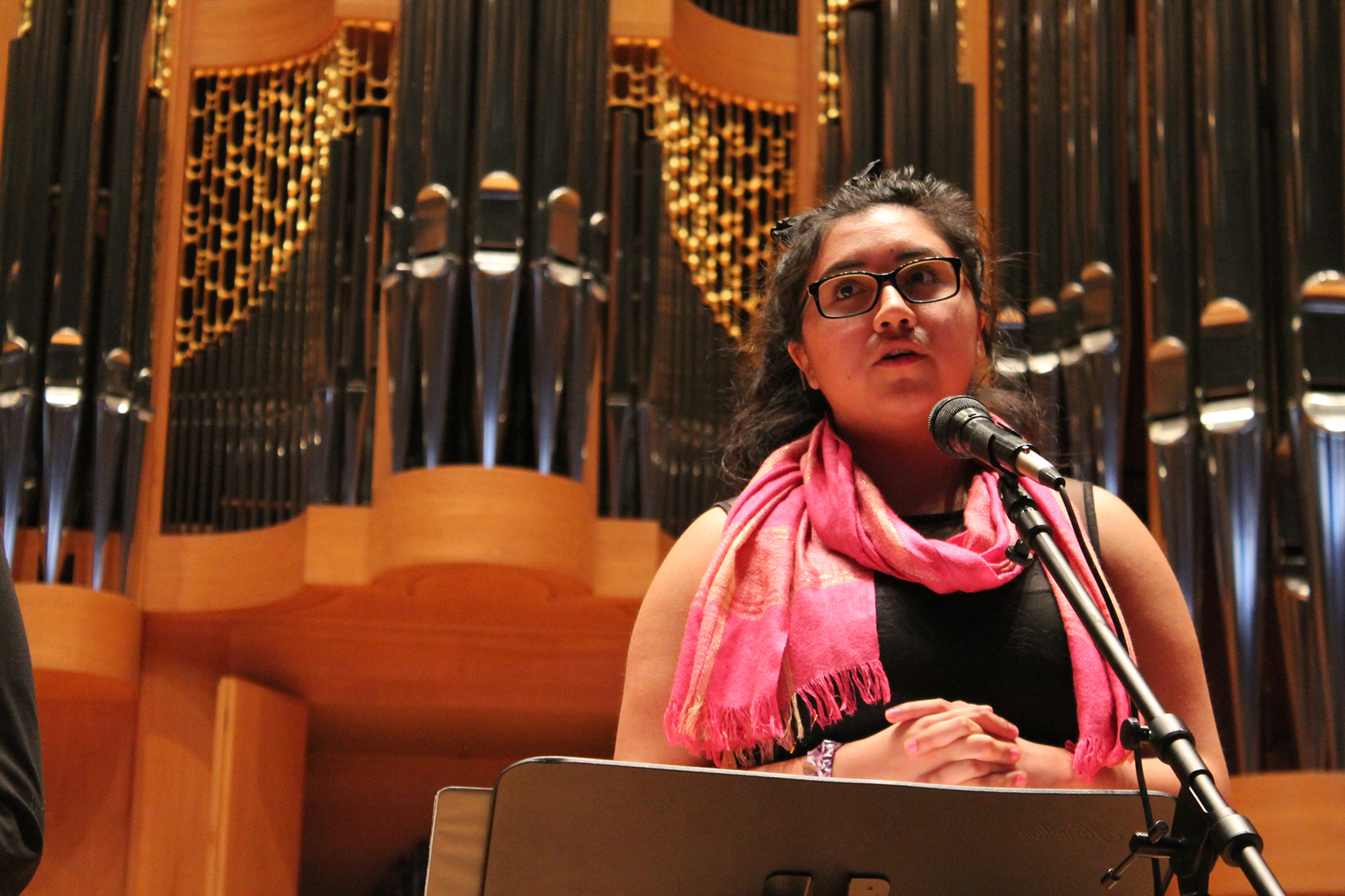 ‘The Vagina Monologues,’ a re-occuring movement

Last Saturday, students of Ohio Wesleyan preformed “The Vagina Monologues” to give voice to women’s stories and struggles.

“I hope that women find a sense of empowerment and that all genders find that they were educated about sexuality and women’s experience,” said senior Claire Hackett, producer and co-director of the production.

For the third consecutive year at OWU, students gathered to perform the set of monologues based on women’s various experiences with sex, rape, orgasm, birth and more.

Before the monologues began, Pitch Black, OWU’s female a capella group, preformed renditions of Macklemore’s “Can’t Hold Us,” Gloria Gaynor’s “I Will Survive,” and  a mash-up “Tonight I’ll be Your Sweet Dream.”

Sophomore Pitch Black member, Emma Sparks, said their performance was incorporated into the show to promote female empowerment through music.

“Although women a capella groups that sing non-traditional music are increasing, they are still a newer phenomenon and are not as common as male groups,” Sparks said.

“It was another way to show that women not only have the ability, but have the passion and drive to do anything.”

The stories mostly focus on a realization or change in how a person feels about their vagina according to Hackett.

“In ‘The Little Coochie Snorcher That Could’ a young woman experiences a lot of trauma to her vagina, including rape when she was 10, but is changed by an enlightening sexual experience with an older woman,” Hackett said.

“But in ‘My Vagina Was My Village,’ a woman tells of how beautiful and wonderful her vagina used to be, and what is like after genital mutilation.”

For sophomore performer Elizabeth Raphael, reciting a monologue meant being able to feel comfortable with talking about vaginas and sexuality.

“I think the overall message of the show is that women from all over the world has every right to be proud of their vaginas, and any act that makes women think otherwise needs to be stopped,” Raphael said.

Yasmin Radzi, a sophomore performer, said being a part of the production helped her to gain closure from a negative sexual experience in her past.

“Butterfly Confessions” is “a love letter to women of color that reveals heartfelt emotions about intimacy, sexual responsibility and overcoming adversity,” according to the Facebook page for the event.

Though written for black women only, OWU’s production was modified to include a diverse group of women in order to properly represent the multinational student population on campus.

Junior Khristina Gardner was one of five directors for the play and said that it would not have been possible without the play’s producer, senior Claire Hackett.

“We are all women of color and for Claire to reach out to all of us to share the heartfelt stories within the monologues was so wonderful,” Gardner said.

“She was determined to take steps towards making a change on this campus and to bring light to various issues and she did just that.”

Gardner said she was very excited about the opportunity for the voices of black women to “finally be heard.”

Her goal for the play was to make the “women feel comfortable and form a connection with the monologues that they performed.”

Senior Madeline Miguel a part of the diverse cast said that her ethnicity is comprised of Japanese, Filipina and White.

“As someone who is of mixed ethnicity its difficult for me to feel like a fit in,” said Miguel.

“I chose to be a part of this production because I think it’s important for women of color to have a voice and a presence on our campus.”

Miguel said her only challenge was that she “felt a little strange and a bit left out” because the monologues were all written for black women.

“I couldn’t relate to black women, but I could relate to struggles of being a minority woman,” Miguel said.

“The directors were excellent at encouraging us that all of us were an important part of this production.”

Miguel added that she was particularly interested in the combination of light hearted, funny monologues and the more serious hard-hitting topics of HIV/AIDS and child abuse.

“It showed the audience a part of a culture with which we coexist, but rarely recognize or notice. It was amusing, sad and all too real,”  said freshman Jessica Sanford of the performance.

From scheduling conflicts to the nervousness of being a first time director, Gardner said she was glad with the way the show turned out.

The first collegiate performance of ‘Confessions’ concluded with a standing ovation from the audience of Grey Chapel. 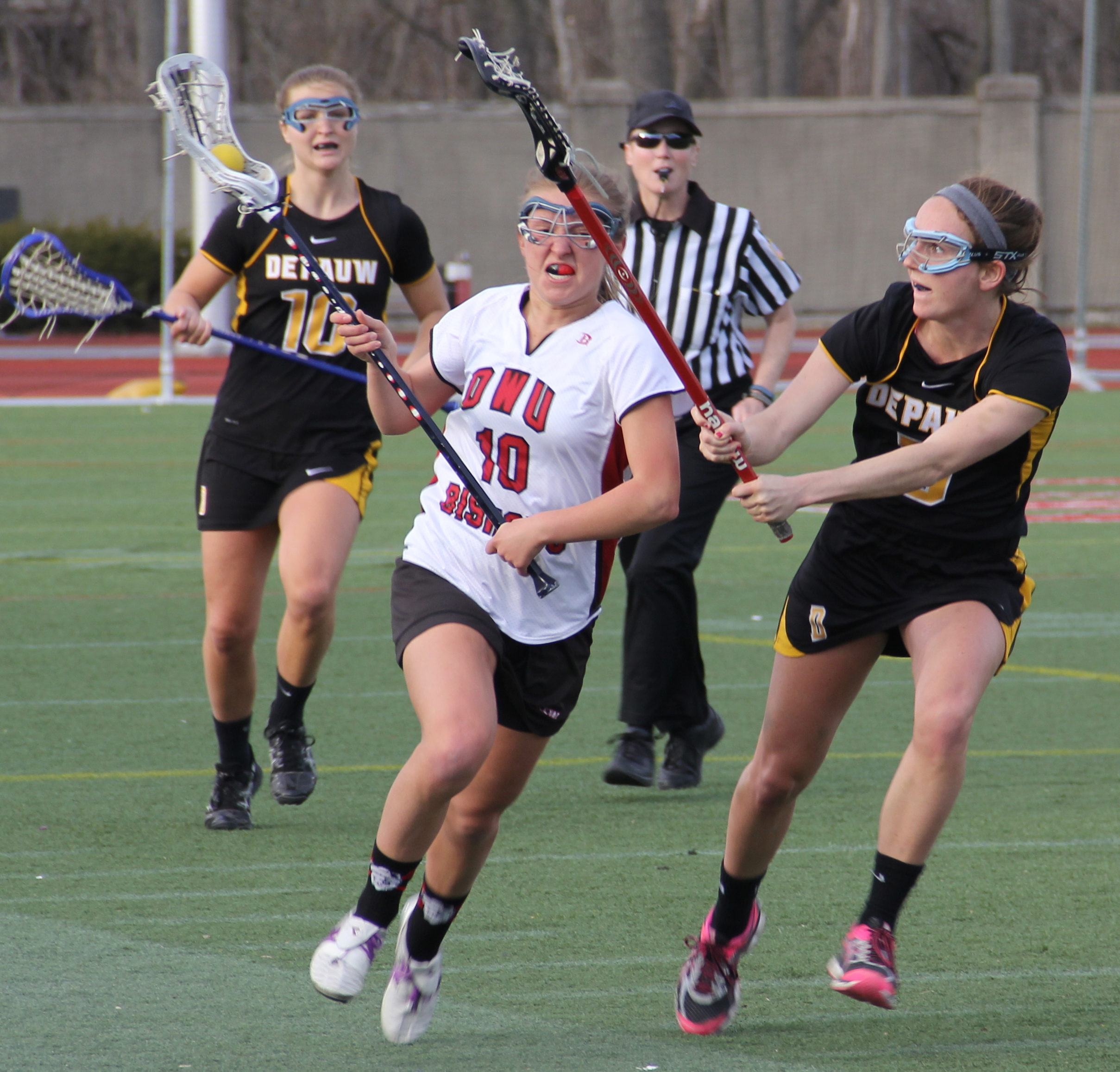 Bishop women’s lacrosse fell short to the Mount Union Raiders last week, but the team still hopes to have a competitive conference season.

After sophomore Patricia Ryan scored a goal in the opening minute, the Raiders were quick to get a goal of their own.

The Bishops were able to answer with goals by seniors Cate Bailey and Theresa Wolfgang, and junior Eliee Foley securing a 4-1 lead for the Bishops.

With 14:12 left in the first half, the Raiders scored starting a 9-0 run against the Bishops going into halftime with the score Bishops 4, Raiders 10.

Coming out of halftime, the Raiders came on strong, scoring twice before the Bishops were finally able to break the streak. Bailey scored with 16:51 left and again with 8:06 left giving her a hat trick in the game. In the end, the Bishops fell to the Raiders 6-15.

Despite the loss, the Bishops said they are looking at it as a learning experience and a way to get better.

“Overall our turnovers and shot placement have kept us from a couple extras wins on the season, said head coach Chelsea Huguenard.  “I do believe that these minor issues are something we can figure out before our conference games start.”

The game against Mount Union was a non-conference game in preparation for the NCAC games, the part of the season that is most important and Huguenard hopes the team will play competitively.

“We have a great squad, and they have the ability to be successful this season,” Huguenard said.

While focusing on this season, the team also looks to the future.

Despite having very strong upperclassmen, the team also has a very strong sophomore class that has been making significant contributions to each game.

Additionally, Huguenard said she has been working on developing the freshman, expecting them to be game ready later this season.

With conference games against Transylvania and Kenyon on April 4 and April 6 respectively, the Bishops look to clean up on those issues and finish the season with a strong performance. 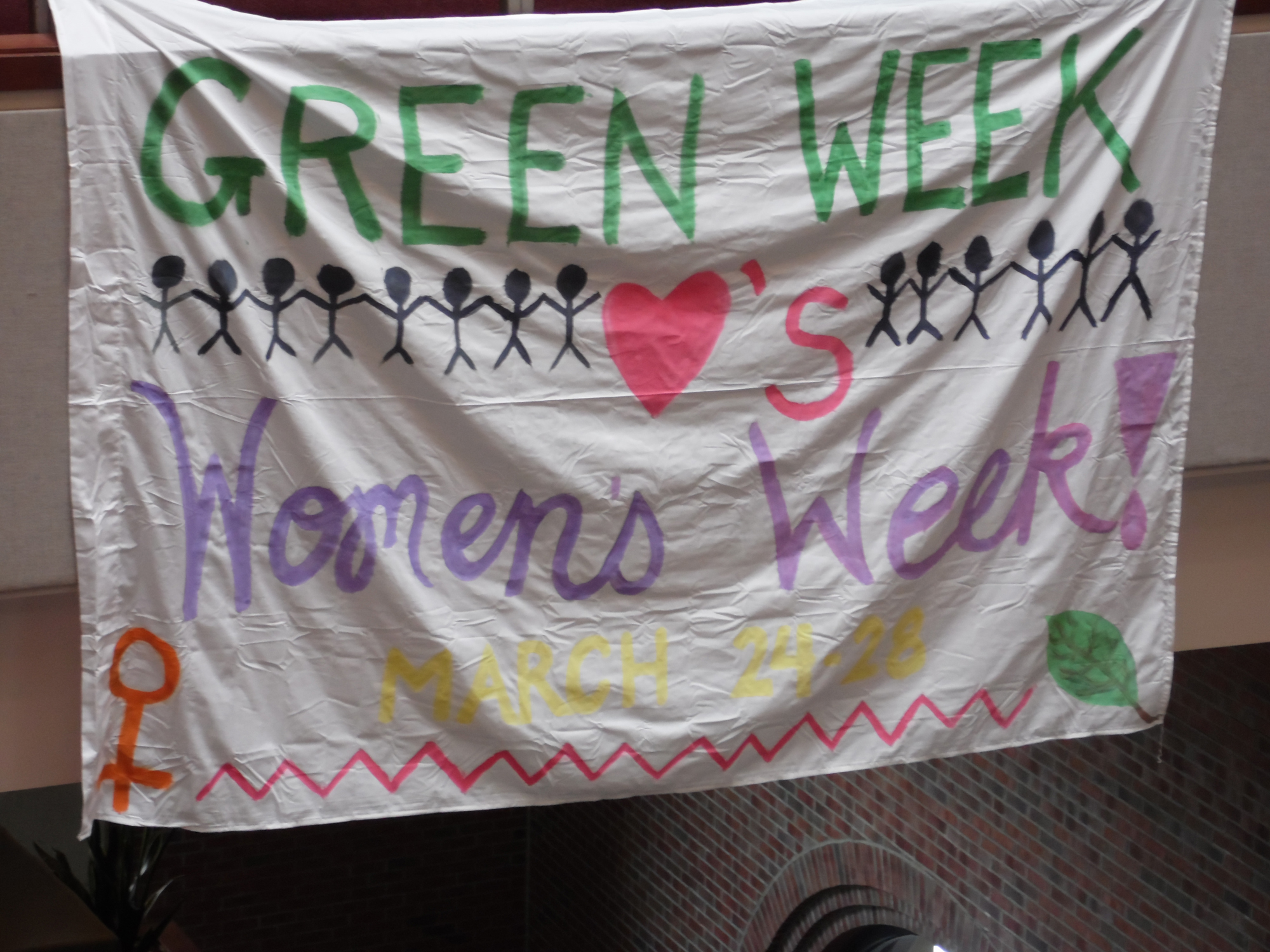 Women’s Week, an annual series of programs started in the 1980s, has begun again this year and will soon make history.

Friday night’s program will be a performance of “Butterfly Confessions” – the first time it has been read without the direct involvement of its author Yetta Young.

“Butterfly Confessions” is a series of monologues on the experiences of women of color and raising awareness about violence against women and the effects of HIV/AIDS.

It is being performed in conjunction with “The Vagina Monologues,” a similar set of readings that has been held on campus for several years.

The Women’s House (WoHo), House of Peace and Justice, House of Black Culture and Citizens of the World House have all collaborated in planning the week.

For WoHo, led by junior moderator Meredith Harrison, the main focus has been on Thursday’s Take Back the Night.

At Take Back the Night, an annual event, students share experiences with sexual violence and march afterward.

“The event has become so well attended that we have been breaking fire code in Bishop Cafe, where the event has been held for a long time,” Harrison said.

“Moving Take Back the Night to Benes (Room) B allows greater attendance at the event.”

Junior Lauren Rump, a WoHo resident, said she is excited for all of the events that are offered this week.

“I hope the week brings continued awareness to a variety of women’s issues that women are dealing with at our campus, nationally and globally,” Rump said.

“I hope the week can also serve as a way for people to come together to celebrate, heal, empower and act.”

Harrison said she hopes this week will bring OWU’s attention to women’s issues that people do not necessarily think about.

“Women of color, global women, women in poverty, queer women and many other women are often left out of the conversation when it comes to women’s issues,” Harrison said.

“I hope people attend all the events, but especially the events that discuss some of the intersecting identities.”

After three sets of intensely strategized rallying, Ohio Wesleyan’s volleyball team was unable to successfully combat Muskingum Wednesday, September 5 at Edwards Gym.
TheMuskingum Muskies won the game scoring 23-21 in the first set, 25-20 in the second, and 25-18 in the third set.
Muskingum began the first set with a 15-9 lead against the Bishops, followed by a strong rally by OWU to harbor in on the Muskies 15-17.
However, kills from Muskingum’s Hanna Rose and Katie Sidwell kept the Bishops at bay to finish out the first set 23-21.
The start of the second set saw a strong offensive attack from OWU, giving the Bishops a 10-6 lead. The Muskies quickly retorted, with a well-strategized strike targeting the Bishops’ defensive specialist, freshman Danielle Birney. Birney managed to initially stop the kills, but Muskingum gained a point running Birney around in long rallies.
The Bishops came out obviously determined once again in the third set, but after a series of blows by Muskingum and several defensive missteps, lost 25-18.
Senior middle hitter Ashley Haynes said it was it was a really tough mental game.
“Our chemistry as a team hadn’t quite clicked at the right moments and it’s hard to get that momentum back up once you’re down,” Haynes said.
Freshman Elizabeth Simmons said that, although the lady Bishops did not play their best, they still made the Muskies work for their win.
“We did not give up. We did keep fighting back,” Simmons said. “After Muskingum took the lead, it wasn’t like we put our heads down and were finished playing. We kept working hard even though things weren’t going our way during the game.”
Freshman libero Danielle Birney said the game could be used as a learning experience for the future.
“We didn’t play as a team,” Birney said. “We werent ready for the game like we thought we were, but we are taking this opportunity to better prepare ourselves for the upcoming obstacles.”
Senior setter Brittany Vickers said she agreed with Birney.
“We are a relatively young team and so we need to go into every game with confidence, but not cockiness, each game is an experience we need to learn from so we can continue to be successful as the season progresses,” Vickers said.
Although the Bishops lost Wednesday, they won three games during their opening tournament this weekend.