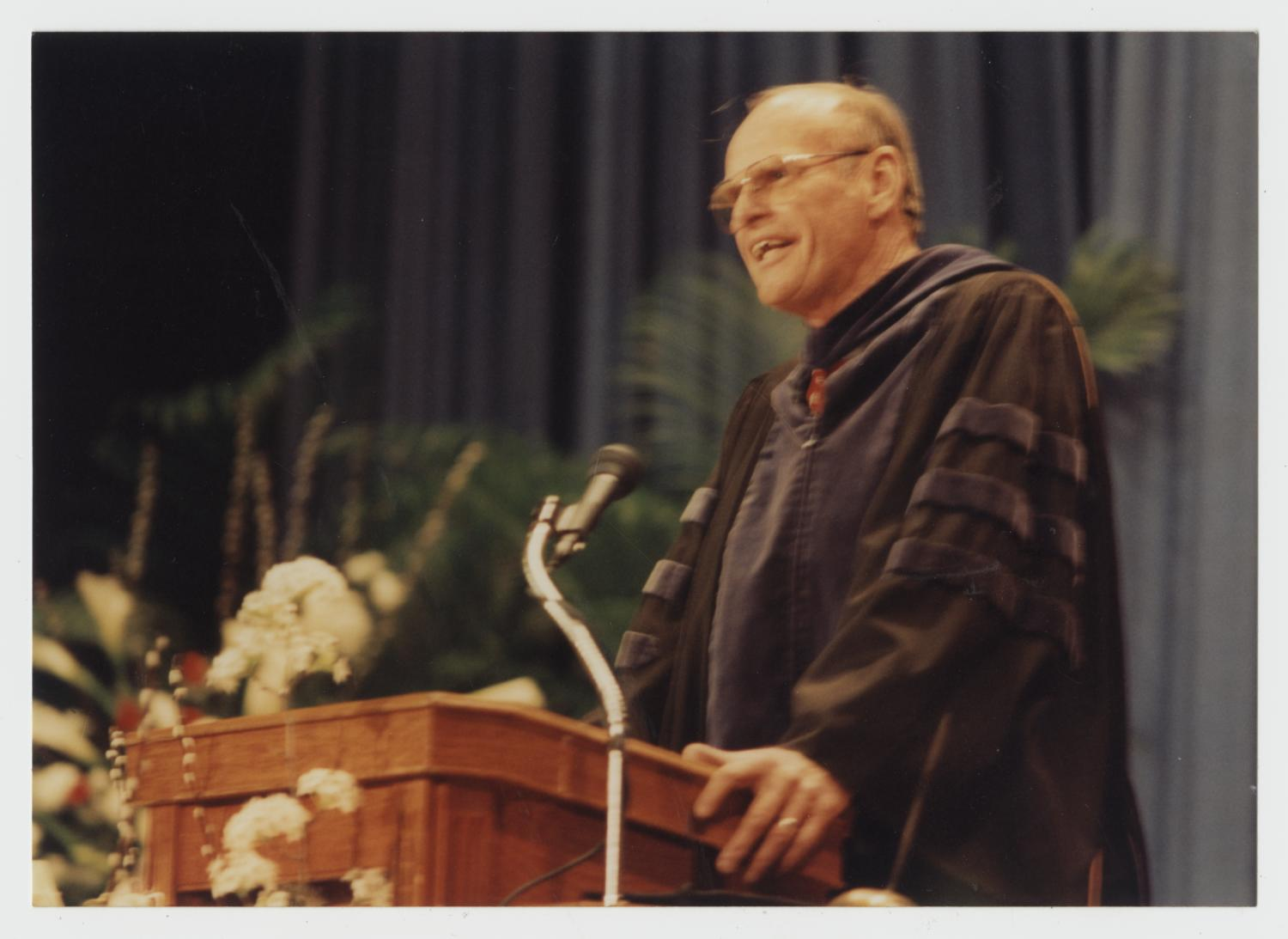 The death of Ohio Wesleyan University’s (OWU) 12th president provides an opportunity to look back and acknowledge the adversity faced and dedication required when it comes to shaping a place of higher education such as OWU.

Dr. Thomas E. Wenzlau died Aug. 1 at the age of 91 in Colorado Springs.

His career at OWU was marked with change and progress and the oversight of campus growth.

Wenzlau saw the creation and completion of the $33.5-million XIVth Decade development program as well as the establishment of the need-based system of grants and funding that allowed students to pay for college and university.

He oversaw campus projects that furnished facilities such as the Chappelear Drama Center, the expansion and remodeling of Sanborn Hall and the construction of the Branch Rickey Arena.

When it came to academics, Wenzlau created the Reach for Quality Program, which aimed to reinforce the university’s tradition of educational quality and its commitment to intellectual achievement.

The Reach for Quality program, and its commitment to academic excellence, caused a disconnect between the Ohio Wesleyan student body and the president. The program resulted in reducing enrollment from its high of 2,500 to 1,800 by the fall of 1985.

Although the student body believed Wenzlau had taken the wrong risk in reducing enrollment, the university claimed its best freshman class in five years with a number of freshmen commitments from the top one-fifth of their high school class climbing 5 percent, and test scores increasing exponentially.

Some such as Edward B. Fiske, a New York Times reporter, seemed to side with the Ohio Wesleyan student body.

“The administration at Ohio Wesleyan says that it is looking for students interested in a wide range of nonacademic options,” Fiske wrote, “but it seems to have collected a student body interested mainly in a good time.”

In an interview with OWU Magazine, Wenzlau shared his thoughts on leading the University through the 1970s, calling the era “a decade of important causes, of students pursuing the rights and recognition of young adults, of the black minority and female majority seeking equality of opportunity and elimination of double standards, of concern for the environment, and of students focusing on careers and employment opportunities.”

Wenzlau was the choice of an Ohio Wesleyan trustee selection committee, assisted by faculty and student representatives after screening more than 150 candidates.

Commenting generally on the appointment of a new president for a small liberal arts school, and specifically on his move to Ohio Wesleyan, Wenzlau said,“A new man coming in is more likely to bring fresh ideas, although it does take some time for him to become acquainted with the functions of the institution,” to “learn what makes it tick.”

Prior to becoming Ohio Wesleyan’s 12th president, Wenzlau taught at Wesleyan University, Kenyon College, and Lawrence University, where he served for a year as associate dean of the faculty before returning to his alma mater.

A 1950 OWU alumnus, Wenzlau received his Bachelor of Arts degree with departmental honors in economics. He was also elected to Phi Beta Kappa and served as president of the Sigma Alpha Epsilon fraternity.

Wenzlau’s success extended into athletics as he lettered in track, basketball and football, captaining the team in 1949 as a pass receiver and kicker.

He set multiple records as kicker including highest punting average in a single game, as well as the season record and career record, earning him an induction into the Battling Bishop Hall of Fame in 1972.

Wenzlau is survived by his daughters, Kathy Wenzlau Comer and Janet Wenzlau Von Kraut and sons, David and Scott Wenzlau.