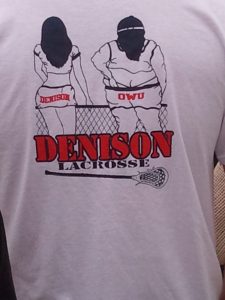 So. Denison, apparently, sucks. At least that’s what the masses of cheering OWU fans chanted at Saturday’s Ohio Wesleyan vs. Denison lacrosse game.
I don’t know much about lacrosse, and I don’t feel any need to discuss the game at length because I wanted our team to win as much as the next fan. What I do know is that I saw some things that “sucked” on Saturday as well.
The shirts some Denison fans had made for the game? Those sucked. The side-by-side drawings of women from each school, respectively labeled on – of course, where else? – the backs of too-short skirts, weren’t just offensive to women from OWU. Attacking women’s body image and ranking one above the other is offensive to ALL women. In fact, it should be offensive to anyone, regardless of gender.
The signs OWU students held throughout the entire game, degrading Denison women and attacking their sexuality? Those sucked, too. “What’s the difference between Denison girls and blowjobs? Guys actually like blowjobs,” read one. Another exclaimed, “Denison girls: it’s like throwing a hotdog down a hallway!” What scholars we are.
Let’s take a minute to discuss women’s sexuality. Each woman from Denison, or anywhere for that matter, has a sexuality entirely her own that cannot be categorized along that of her peers with condescending one-liners on a poster. Also, each member of this diverse group of women has the right to do whatever she wants, whenever she wants, with whomever she wants, and no one, opposing sports fans or otherwise, has the right to ridicule her.
There is no right or wrong way to have a body or to practice your sexuality, but there is certainly a wrong way to show sportsmanship, and fans on both sides found it at Saturday’s lacrosse game.
Attacking women from the opposing side at a sporting event? THAT sucks.
What relevance does either the appearance or sexual practices of women who may not even be attending the game have on the performance of the (male) players?
Surely we can find better ways to support our players, or even to show our dislike of the other team.
We can even come up with sarcastic posters that are actually relevant to the game.
So why are we so inclined to degrade women?
Why did two separate groups, on either side of this lacrosse rivalry, decide that the best way to show support for their team was to insult the women at the other school? This is offensive. This will never stop being offensive. And making judgments about the appearance or sexual proclivities of women does not actually reflect their character. It reflects yours. And right now, neither Denison nor Ohio Wesleyan is looking too good.

Restoring Stuyvesant Hall: An inside look at new features