Tim Miller is a performance artist whose work currently focuses on marriage equality and addressing the injustices facing lesbian and gay couples in America.

Miller said, “My performances over the last several years at OWU, which have explored gay identity, marriage equality and immigration rights for gay bi-national couples, were breaking new terrain. For a long time my performances would be the only internationally touring show on the subject.”

This event was made possible by a theory-to-practice grant received by senior Ryan Haddad and professor of theatre and dance Edward Khan.

“I thoroughly enjoyed the performance, particularly the last one which was about his marriage because that occurred during a week in which I was doing a workshop with him,” Haddad said. “This was right around the time that the Defense of Marriage Act was overturned so he [Miller] went right away and got married.”

Miller said, “though Ohio remains one of only 13 states without marriage equality today, after the coming supreme court decision this June, I am sure the next time I land at CMH I will be arriving to an equality state.”

Miller said his performances have been presented all over North America, Australia and Europe in such venues as Yale Repertory Theatre, the Institute of Contemporary Art, the Walker Art Center and the Brooklyn Academy of Music.

According to his biography, “Miller has received numerous grants from the National Endowment for the Arts. In 1990, Miller was awarded a NEA Solo Performer Fellowship, which was overturned under political pressure from the Bush White House because of the gay themes of Miller’s work.” 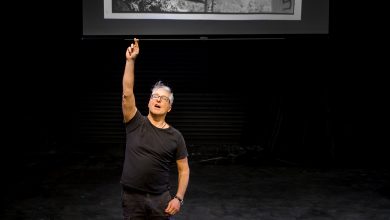