Fourteen empty chairs sat in the front row as President Rock Jones stood behind the birch plywood podium and addressed the room filled with Ohio Wesleyan faculty during their Monday, Feb. 29 meeting, the second official meeting of the semester.

The faculty discussed options to increase enrollment, but Jones began by thanking everyone who was involved with the I³ 30-minute lecture and the production of “Artifice.” He was impressed by the diverse crowd of the lectures and called the production a “terrific, major production.”

Jones then asked a popular question: What’s the right size of OWU and “what strategies will achieve that size?”

A long list of ways to reach the goal of 2,020 students by the year 2020 was presented. A couple of those items to improve upon were career services, athletics, international admission strategies, regional recruiters and the physical campus, which Jones talked about and said “we’ve made strides, but there’s more to be done.” He also specifically brought up the improvement of first-year housing.

Chris Wolverton, professor of botany-microbiology and the chair of the Committee on University Governance, began with a PowerPoint to highlight student recruitment, student experience, program initiative and physical campus.

He reiterated the importance in finding the right students when recruiting.

“Identify students who are able to pay so we can continue to offer heavily discounted tuitions to those who need it.”

When talking about student experience, Wolverton said he wanted to get the point across to potential students.

The equation “630 + 85% = 2,026” was left on the screen. Wolverton explained that 630 represents the number of students and the percent represents retention rate.

When talking about the retention rate, which is currently at 81 percent, Wolverton said there’s a lot of work behind the number.

“It’s arguable this number is doable,” he said. “Redesigning the entire student life side of campus.”

When Wolverton pointed out the bold new strategy of the Board of Trustees, Michael Flamm, a faculty member, said, “We invest in the future because the faculty don’t take salary increases.” 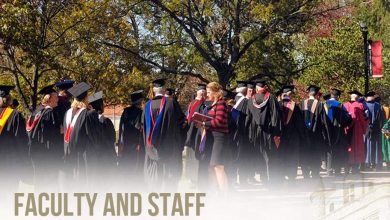