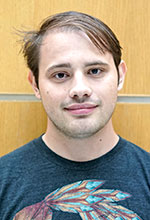 By Chris Pessell, Special to the Transcript

When people think of large areas of ice on Earth, it’s a given that Antarctica is thought of first, with it being a continent sized wasteland of ice and penguins. However, most people forget that
snowy neighbor to the north, Greenland.

Greenland is the second largest ice sheet on Earth’s surface and, unlike Antarctica, has a significant amount of people living on the island. Greenland is actually a very important ice sheet, especially with the growing concern of climate change. When it comes to climate change, the polar regions of the Earth are most the most susceptible as even small changes to climate can lead to big changes in ice and snow accumulation. As temperatures continue to rise in the Northern hemisphere, an increase in melting and calving in Greenland occurs. Scientists predict that if all of Greenland were to melt, sea levels would rise by a little over 7 meters.

For the last year, research has been continued with Dr. Nathan Amador Rowley, Assistant Professor of Geology and Geography, from his dissertation on supraglacial lakes on the Ilulissat
Glacier in Western Greenland. The Ilulissat Glacier has the largest concentration of supraglacial lakes on the ice sheet and is responsible for 7 percent of mass loss for the ice sheet. The goal of the study was to better understand how temperature, data that is typically more accessible, relates to the volume of water seen filling up depressions on the surface in satellite images.

Mapping techniques, temperature data, satellite images, and a temperature index model all showed that, in the summers of 2013, 2014, and 2015, snow and ice melted enough to cause large volumes of meltwater to flow into these supraglacial lakes. This water would then flow out into other lakes or to the bed of the ice sheet. For instance, one of the lakes increased from over
13,000 cubic meters to over 3,630,000 cubic meters in a matter of days. A little more than a week later, most of the water was gone. That is the equivalent of 1,452 Olympic-sized swimming
pools coming in and out of one lake during one month of one melt season. The results of the temperature model showed that temperature was responsible for 70 percent of the volume increase.

What does this mean? Basically, as air surface temperatures in Greenland increase, so does higher volumes of water flow through these supraglacial lakes before flowing out to the ocean. This statement may seem obvious, but there are many different factors that also lead to increased meltwater production, like solar radiation for example.

When relating this research to increasing sea levels, things look grim and indeed, this research does present a warning that more and more snow and ice is melting. However, temperature data
in this study is just used as proxy for a real-world prediction. Melt is driven by many processes and reality is much more complex than any temperature model could show on its own.

Hopefully, this research and others like it will be a driving force in environmental concern that will fuel continued policy change and environmental movements such as the Paris Climate Agreement.