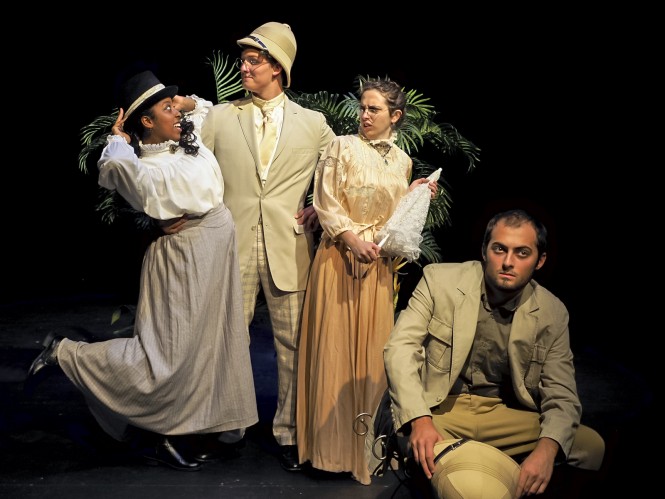 The weekend of Oct. 4 brought colonization and modern times together at Ohio Wesleyan University’s production of Cloud 9.

The show was directed by senior Ares Harper, making it the first show to be directed by a student in over 45 years.

Cloud 9 is divided into two acts that correlate with one another. The first act focuses on a British family in colonial Africa circa 1880. The family dynamic plays a key role in the plot of the show. Various characters are forced to suppress their sexual desires and orientations due to the social structures of the times they live in. This allowed the audience to draw obvious parallels between sexual oppression and colonialism.

“The show brought up a lot of serious questions… and social commentary,” sophomore Hannah Carpenter said.

The second act was set in modern-day London. This act was more lighthearted, allowing the audience to laugh while still understanding the themes of the show

“It was a good way to interweave humor with an important subject matter without it being convoluted or overdone,” sophomore Claire Yetzer said.

The audience received the show well, with standing ovations at the end of the program. Some actors got high praise as well for their roles in the show.

“I liked Edward in both the first and second half… he seemed honest and genuine,” Yetzer said.

Edward was played by freshman Jasmine Lew in the first act and sophomore Logan Kovach in the second act. The character is a gay man who must suppress his sexuality in the first half, and then in the second half come to terms with what he identifies as.

“It was interesting to see him in both the Victorian era and the modern era,” Carpenter said.

Each character had to grapple with their needs and desires to better themselves. The connection to the show was strong among the audience, with both Yetzer and Carpenter feeling the show offered insight into the need for self-enlightenment.