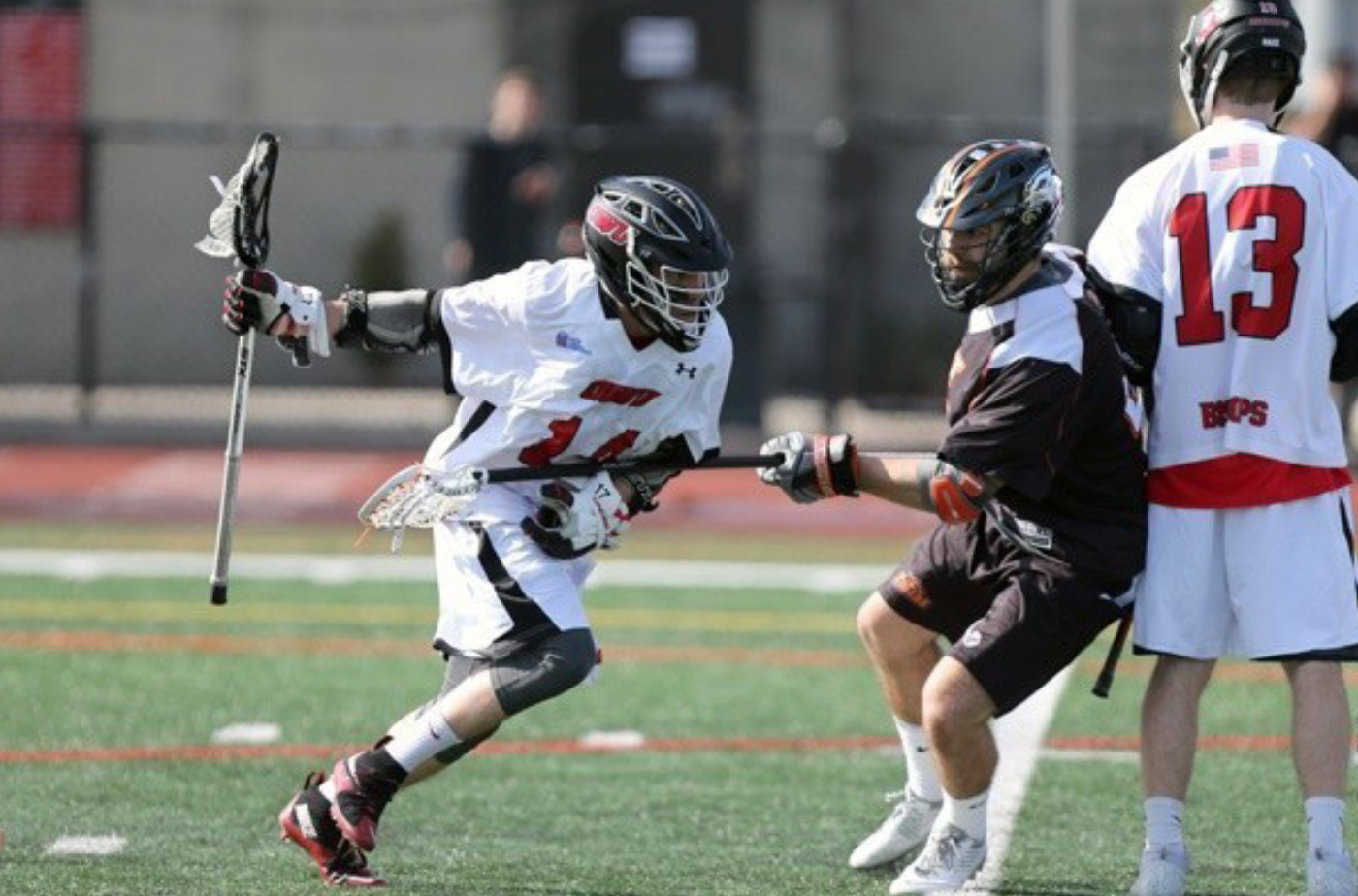 The Ohio Wesleyan University men’s lacrosse team is facing the end of the spring season and as the NCAC championship draws near, the team is prepared.

“We’re in the conference playoffs next week and we have to take it one game at a time,” said junior goalie Alexander Pacilio.

The OWU lacrosse team currently has the second best record in the conference with only one loss to Denison University this past Sunday,12-8. The Bishops are 9-5 overall this season and received votes in for national ranking, according to ncaa.com. The tough schedule this season is something that is good for the team as a whole, Pacilio said.

“It’s a challenge but have to play these teams since iron sharpens iron,” Pacilio said.

Sophomore defensive starter Jake Worrell said, “We’ve played a lot of tough teams and been really close to beating them. It’s kind of disappointing to not get over the hump yet but it …  motivates myself and my teammates.”

Two teams that were the most demanding was Rochester Institute of Technology (RIT) and Salsbury, Pacilio said. Both teams are currently in the top 5 rankings, according to ncaa.com. The Bishops lost to RIT 12-11, which was the start for freshman Joey Sichenzia. They also lost to Salisbury 10-6 but there are good things to come out of those games.

“Playing RIT the first game was an exciting experience,” said Worrell. “I know that if we got a shot at either of those teams we could pull a victory. We are a different team now and have gone through so much and we have learned so much and I would love to play either team again.”

The team’s expectations before the season started was to win the NCAC championship, said Worrell. He said he believes that they will see Denison in the championship game.

“Getting another chance to beat Denison is great,” Worrell said. He added that the team has struggled in the past against them but they are committed to correcting past mistakes and executing on their goals. The last scheduled game against the rival was a shootout which Denison came back from a six point deficit.

The post season is fast approaching and Worrell said he thinks that the team has the ability to win big.

“Winning the NCAC is very achievable,” Worrell said. “We have to finish up strong in the regular season first and beat Wooster to secure the second spot and then win our first round game.”

The Bishops have one more game against Wooster April 22. The team has tallied over 190 goals and average about 42.9 shots on opponents goal. The team also is strong in faceoffs winning 206 while losing 137.

Wooster is the Bishop’s last regular season opponent. The last time these two teams met, OWU won 22-6. But the team needs to stay on track, according to Pacilio.

“We have a lot of close games with a bunch of teams in our conference, but we believe if we play OWU lacrosse, it doesn’t matter how other teams play because we dictate our destiny,” Worrell said. 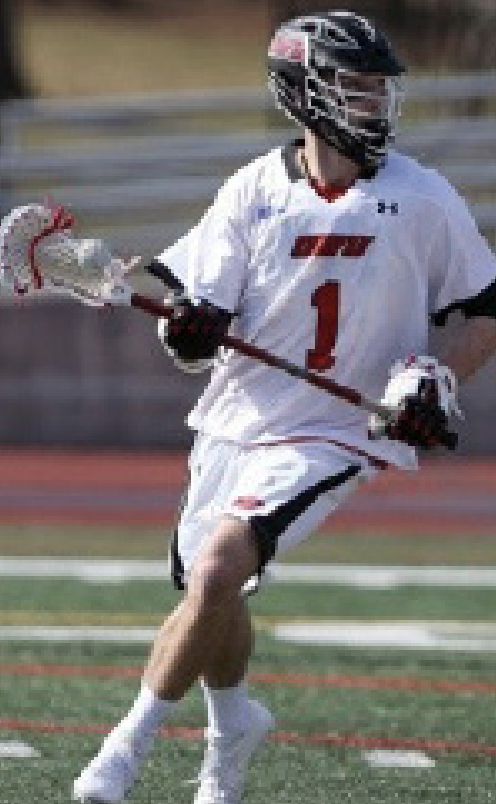 The men’s lacrosse team lost 12-11 against the top-five ranked Tigers in a shootout that went into overtime while also giving one freshman some well needed experience.

The Ohio Wesleyan Lacrosse men’s team started the season Feb. 18. They would play their first game against Rochester Institute of Technology (RIT) who are currently ranked #2 according to usila.org’s coaches poll.

Between performances by young freshmen talent, and leadership from the returners on the team put up a fight and set the tone for the rest of the season.

The Bishops went down 5-0 to RIT in the beginning minutes of the game. With the home field advantage, they didn’t give up and fought back to force the game into overtime.

“Going down 5 goal was nerve-wracking, but a senior came over and told me to calm down and I got comfortable and goal,” said freshman goalkeeper Joey Sichenzia.

Leadership by returning starters Max Tennant, who finished the game with three goals, and junior Trent Schulte, who had the first goal to start the Bishop’s came back, the team rallied and put up a fight. After a few big hits, and a couple goals, they found the back of the RIT net. It was time for the freshmen to show what they’ll be bringing to the table this year.

One of the biggest freshmen additions to the team this year is Sichenzia who has started all three games for the Bishops this season and his best game was his first ever collegiate match against RIT.

Although he let in five quick goals he then followed that up with nine saves. Which is tied for the most saves in an opening game since records have started being kept here at OWU.

There is high hopes from Sichenzia this season as he has been solid in goal since the first 12-11 overtime loss to RIT. Sichenzia has a lot of confidence going forward after the first loss.

“Even though we lost still had a lot fun and still made a statement that we are not a team to mess with. Although these big teams are definitely no joke…neither are we,” said Sichenzia.

The Bishops have a chance to do big things in both the NCAC and in the NCAA tournament this year if they can keep up their fierce play. As more freshmen continue to step up into roles on the team they will just become stronger.

The returners on the team will continue to bring leadership and teach the freshmen the winning culture of being a Bishop’s this season. They are currently at ranked #13 according to the week 2 coaches poll on usila.org. 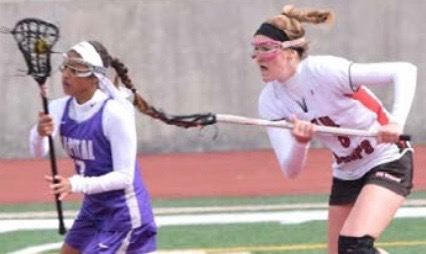 A bittersweet feeling was left on the field on March 19 as Ohio Wesleyan’s women’s lacrosse team rallied against Capital, but was ultimately defeated in the last quarter. At Oberlin, the men’s lacrosse team took home another win.

Both teams had the opportunity to travel over spring break: the women’s team to San Juan, Puerto Rico, while the men’s team went to Maryland.

Clouds blocked out the sun and a chilly wind kept spectators at Selby Stadium alert as the women’s game played.

Capital, ahead by 4 points at the start of the third quarter, made it a difficult match.

“The game against Capital was a tough loss since the score was so close, but everyone on the team gave it their all which is all that matters,” said freshman Sofia Corrao. She contributed 2 assists and scored 2 goals by the end of the game.

Head Coach Chelsea Huguenard said, “Our goalkeeping from both Natalie [Reddy] and Kelly [Coffyn] kept us in the game.  Our second half we played much better on the offensive end, but it was just not enough.” The final score was 13-11.

Meanwhile, at Oberlin, the men’s lacrosse team won their game with a final score of 19-9.

The Bishops had an 11-0 run to start the game. Within the first minute of the game, freshman Jack Harvey scored a goal, giving the Bishops a nice lead.

Freshman Max Tennant led the Bishops with 4 goals and an assist. Junior Ben Rigger was credited with 8 saves.

Both teams had the opportunity to compete as well as grow closer as a team as they travelled to new places during spring break.

Huguenard said the area was beautiful but, “The heat was a new obstacle we have not dealt with this season, and also the competition was fierce.”

The team played two games, one against Oneonta State and one against Roanoke. The Bishops lost both games.

Senior Patricia Ryan said she was proud of how her team performed. “You only get better when you go up against competition like that.”

Coming back to OWU, the team had no time to relax. They played two games and finally got a break this past Sunday.

“It’s been very exhausting, but this team is motivated,” Huguenard said.

In Maryland, the men’s team played two games as well, one against Salisbury which was a close loss of 12-13 and another against Messiah, which the Bishops won 17-3. 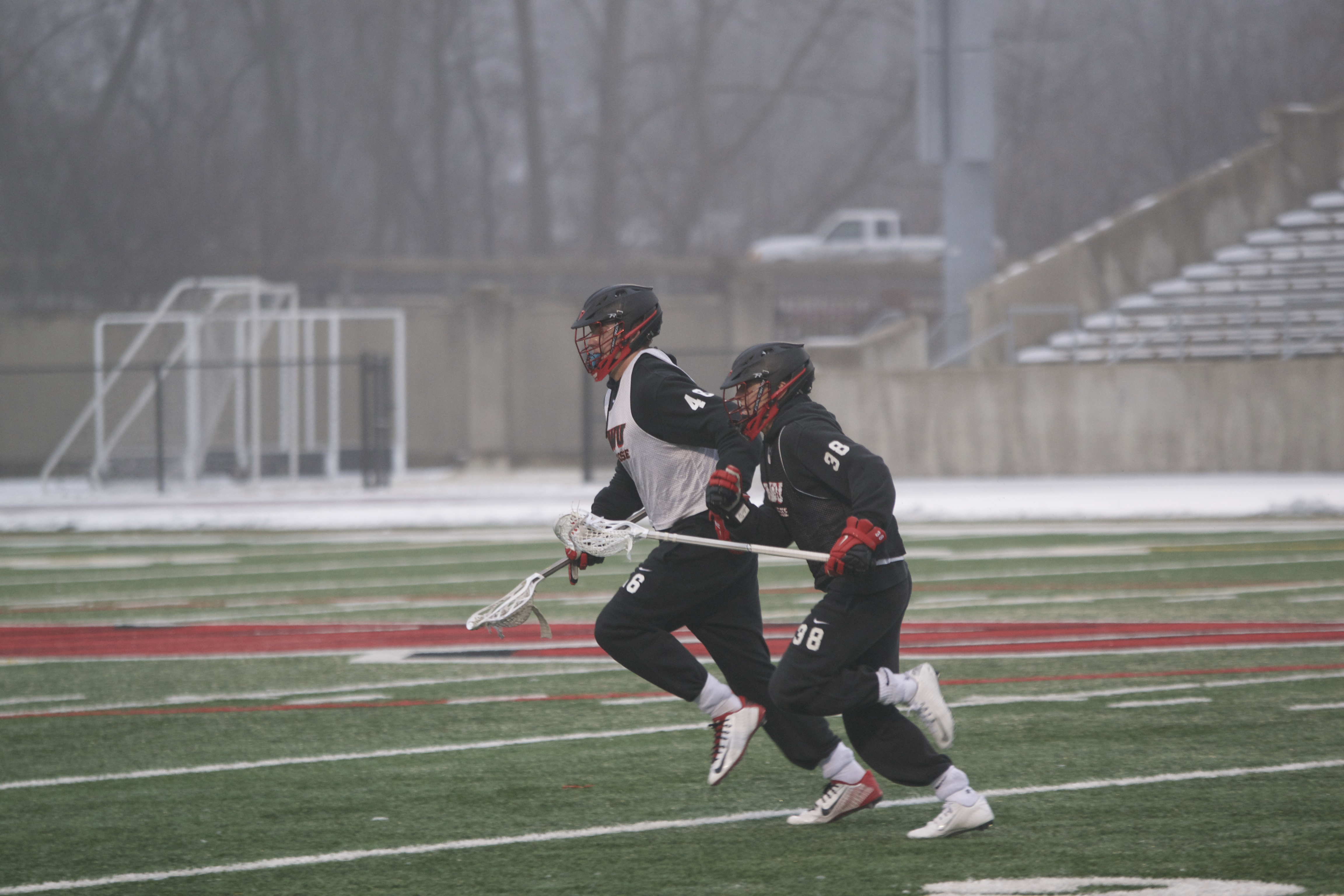 Ohio Wesleyan men’s lacrosse team is coming off one of their best seasons in the program’s history in 2015. This year, they are ranked 11th in the preseason USILA Division III coaching polls for the upcoming season.

The Battling Bishops finished with an overall record of 18-1. They lost to Gettysburg in the quarterfinal of the Division III NCAA tournament.

A total of nine OWU seniors are returning from last year’s team, one of which is senior captain and defender Jordan Carlson.

“I know that we can be as good if not better this year. We have a lot of guys from last year’s team [who] were contributing to our success,” Carlson said.

The team is looking to recover after losing 10 seniors who were major contributors to last year’s team, including some who were All-American and All-Conference players. But Carlson said he was optimistic that the incoming freshman class can fill that void.

“This year’s freshman class is very talented and a lot of them are going to be playing for us at some point this season,” Carlson said.

Players express their excitement for the season to begin when they play Augustana College on Feb. 20 at home in Selby Stadium. The next game will be on the road at Otterbein on Feb. 24.

“The team’s goals for this year are the same as they are every year,” said junior defenseman Justin Smith. “We want to win the NCAC regular season, win the NCAC tournament, make the NCAA National Tournament and win a National Championship.”

This year, the team will have six coaches. Head Coach Mike Plantholt returned along with assistants Trey Keeley and Jesse Lawrence.

Joining the coaching staff is Keith Long, Ryan Sullivan and Tommy Minkler. Minkler was a senior and starting captain on last year’s team. 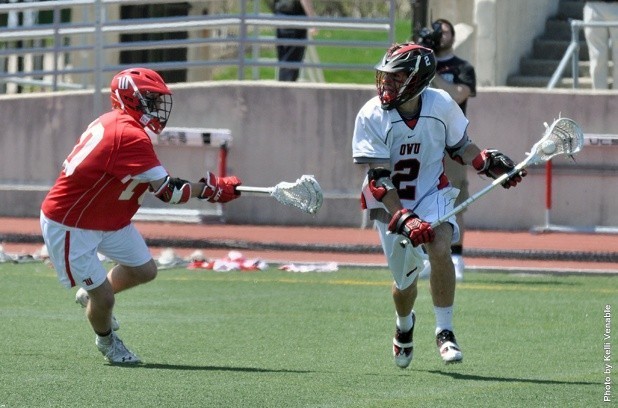 Freezing temperatures and several inches of snow could not stop the Ohio Wesleyan men’s lacrosse team; however, it did cause them some trouble.

Because of bad weather, the team had their Feb. 14 season opener against Augustana College moved to the Woody Hayes Center indoor facility on the campus of The Ohio State University.

“It’s one of the nicest facilities in the country,” said senior attacker Tommy Minkler. “It was one of the coolest playing experiences I’ve ever had.”

The second game, which was going to take place on Feb. 21 in Salem, Va., against Roanoke College, was postponed. Weather was once again the determining factor.

“We were all looking forward to the matchup against a good Roanoke team,” said senior midfielder Brendan Bouchard. “Thankfully our coaching staff and administration were able to get the game rescheduled in March when it will be a little nicer out.”

The rescheduled game will take place on March 21.

With the weather gradually warming up the Battling Bishops were able to have games against Otterbein University and Franklin & Marshall College. Both games resulted in OWU wins.

However the men’s lacrosse team, now at 3-0, is still having trouble practicing at Selby Stadium.

Minkler says that the team has to remove snow and ice before each practice using nothing but a single snow blower and a few shovels.

“The snow blower removes most of it but there is still always a thin layer of snow we have to use shovels on,” Minkler said. “It kind of brings us all closer together when we are out there shoveling the field.”

Sometimes the snow is too much and the team is forced to move inside to practice in Gordon Field House.

“With the way the weather has been recently we have been taking it day by day as far as practice goes,” Bouchard said. “We have gone inside for a couple walk arounds but it’s difficult to get a high quality practice inside, so we try to get outside as much as we can for as long as we can.”

OWU’s next game is March 4 when they take on Hanover College at home. They will then go on the road to face Salisbury University on March 8.